MotoGP | Bagnaia: “It was my best weekend in MotoGP” 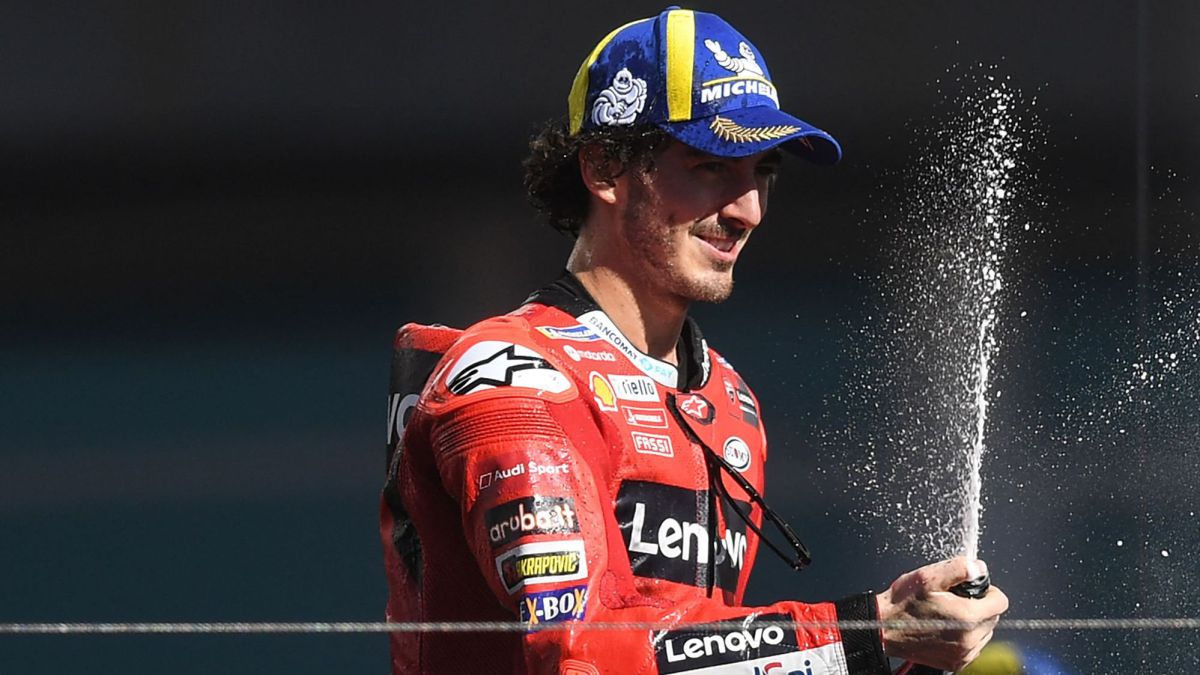 Third win of the season for Francesco Bagnaia on MotoGP, the one that ensures the runner-up and mathematically gives Ducati the Constructors' titl

Third win of the season for Francesco Bagnaia on MotoGP, the one that ensures the runner-up and mathematically gives Ducati the Constructors’ title. Logically, he was happy after winning the Algarve GP.

-Great victory. It has gone like clockwork turn by turn.

-I feel very happy because I think it is my best weekend in MotoGP, and the truth is that I have enjoyed each and every one of the sessions, and when you have these great sensations with the bike everything comes to you as more rolled, more easy. So I am very satisfied with the work done. Compared to April, when I finished second, I felt much more competitive this time, so I am very happy. The race was more difficult in the part of the exit because of the front tire, I had a little more difficulties if I compare it with other races. At the beginning I was trying to push but all the time, when I was leaning on the left side, I felt that my front end was closing, but then I was improving everything lap by lap, so I am very happy to have won this race. And I’m also very happy that we have won the Constructors’ championship, which is a very positive thing.

-He has also been confirmed as runner-up in the world this season. He must feel very satisfied, despite the fall of Misano, which left him without opting for the title. Does this also prepare you for 2022?

-I think we did not lose the championship at Misano, because I had already lost many points before and I started to be competitive later, after many races. And yes, for sure this is a good base for next year, we have also worked very hard and very well with our bike, so for next season we have a great pace.

-How much has your riding style changed from the beginning of the season to this time of year? Has it been difficult to change you and your mindset since your debut year?

-It has honestly been very difficult, because sometimes I felt good in a couple of great prizes, and then I had a lot of difficulties. When I was fast I was fast, but when I had difficulties I had many, I would go down many times without knowing why and even to this day I honestly do not know why I fell so much in those two years. But when I got to the factory team I started to have different feelings with the bike, I began to feel that the atmosphere in the box was very pleasant and it is something that I appreciate a lot. In addition, I think that this winter I have worked a lot with my coach, also a lot at Misano, and we took a good step forward. Sometimes I need more time to feel competitive, maybe because of the way I am, and I think now we have done everything possible to be competitive.

Quartararo arrives at a complicated scenario with his grown enemies | Sports | America Edition
MotoGP Aragon, live | Follow motorcycling free practice
MotoGP joins the ‘boom’ of the ‘inside’ and will have a d …
MOTOGP 197

Loading...
Newer Post
NBA 2021: Joel Embiid will miss several games when entering the Covid protocol
Older Post
These were those summoned by Rueda who scored a goal in foreign football