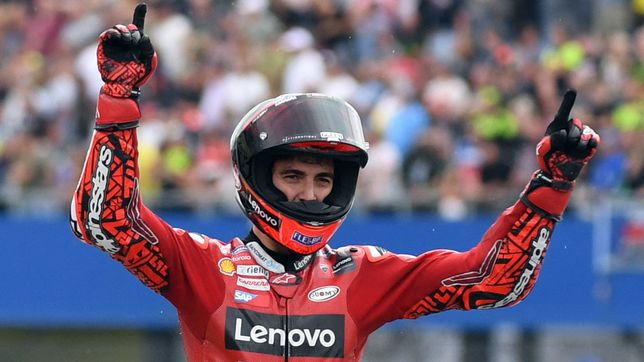 Next weekend the race for the MotoGP title resumes at Silverstone. Pecco Bagnaia is one of Fabio Quartararo's pursuers in the standings. With nin

Next weekend the race for the MotoGP title resumes at Silverstone. Pecco Bagnaia is one of Fabio Quartararo’s pursuers in the standings. With nine races remaining to finish the championship, the Ducati rider is fourth in the World Championship with 106 points compared to 172 for Quartararo. This season he has scored three victories with the Ducati in Barcelona, ​​Muggelo and in the last race before the break, Assen.

The Ducati rider has so far accumulated seven victories with the Italian brand. He did four in 2021. In an interview with GP Racing he has stated that he had some anxiety about getting the first one (Aragón 2021). “From that moment everything was easier.” Thanks to the help of Valentino Rossi, says the Italian, he is now able to better deal with defeats and bad times. “When I get angry I take a deep breath and try to get rid of the frustration, Valentino Rossi taught me,” said the Turin driver.

The Piedmontese has recalled in this interview his beginnings where he suffered being away from his family when he was only 16 years old. Bagnaia decided to join the Valentino Rossi Academy to pursue his dream of reaching MotoGP. “I was 16 years old, I didn’t have my parents to accompany me here and there. I had to take a taxi to go to the gym or train at the Ranch”, adds Bagnaia. Likewise, he has commented that this helped him mature and know that motorcycling was his true passion. “The Academy helped me a lot to grow. Thanks to Valentino I have matured and improved at all levels. I understood what was most important to me.”

How to start a MotoGP – Box Repsol
MotoGP 2021: Loris Capirossi accident in rallies
Losail will not open the MotoGP World Championship in 2023 due to renovations
MOTOGP 708