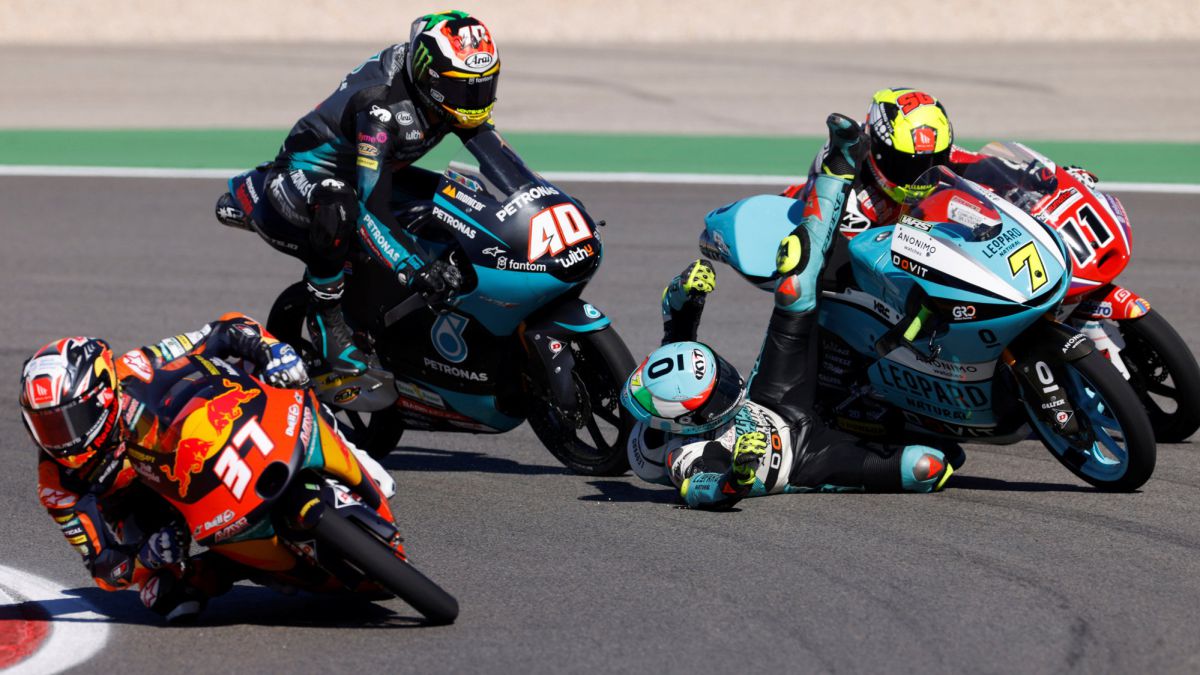 Tension in Moto3 and many doubts for MotoGP. Darryn binder He was once again the protagonist of a shameful action last Sunday that ended up decidi

Tension in Moto3 and many doubts for MotoGP. Darryn binder He was once again the protagonist of a shameful action last Sunday that ended up deciding the World Cup in the small category. An accident that led Dennis Foggia to the ground after touching his rear wheel, along with Sergio García Dols and giving the glory to Pedro Acosta in his debut year. Another of the many that the South African has accumulated throughout his sports career, although with special attention to this season, where his name has been more present than ever.

Many have asked for tougher sanctions for Binder but, far from that (this Sunday was a disqualification for irresponsible driving), The South African will make the leap to MotoGP in 2022 with a Yamaha of the WithU RNF MotoGP Team, with Andrea Dovizioso as teammate. With what, following in the footsteps of Jack Miller, he will skip his passage through the intermediate category, with an experience that is too short to get at the controls of such a powerful motorcycle. Meanwhile, pilots like Iker Lecuona, take the exit door towards WorldSBK.

In fact, that is the big drawback now and why many are questioning his signing. Su aggressiveness is still a point to take into account, Especially for the MotoGP riders, who fear that the South African could do the same, without shame, in a much more dangerous category and in which, in addition, a very important focus of attention is being placed on safety. Therefore, many ask for new orders and, of course, Do not allow categories to be skipped in order to reach the maximum category early and badly. Among the options, Bagnaia puts on the table a ‘super license’ as in Formula 1: “The license is something I like about cars. Only if you get a few things, you can upgrade. It would be something that I would like a lot here, because not everyone deserves where they are. “

Some measures that, without a doubt, Aleix Espargaró would see with good eyes: “In MotoGP it should be more difficult to reach it. There is more and more equality of motorcycles and we are closer together. The category should be protected. “ In fact, that of Granollers, very active in everything that has to do with increasing the safety of the pilots, he notes that he has “some idea what to do.” For now, the Aprilia rider does not shy away from giving his opinion on Binder and showing his rejection for rewarding him with a jump to the premier category: “The Darryn thing has no name. One more. I don’t know what to say. It is one after another, now we have to wait for the Race Direction to act “.

They criticize their arrival

What is clear is that Darryn Binder has become the center of all criticism for MotoGP riders. In fact, Bagnaia also coincides with the words of the one from Granollers and is dispatched with the South African: “The problem is that it is always a rider who does it. That rider will be in MotoGP next year.” And, the most surprising thing, is that until his next teammate, Andrea Dovizioso, doubts Binder’s level for the premier category, although Yamaha’s decision has already been made: “For many it is something strange, but it is a team decision. I think it has very good qualities, but I don’t know if it will be at the level of MotoGP “.

Others, like Enea Bastianini, they already fear for their arrival in MotoGP, from the next tests, for everything that may happen: “It was not a scene worthy of MotoGP. What scares me is that next year he will race with us. “ In view of what the future holds, we can only wait for a quick maturity of Binder, who will share the category with his brother Brad, and with many opportunities to show that he can be a new young promise of Yamaha. In the end, they trusted him for a reason for their new MotoGP project.

A MotoGP star confirmed that he will race the Dakar Rally in 2022
MotoGP: Aragon Grand Prix, live
“Preparation for MotoGP is different from Moto2, there is much more work” – Fabio Di Giannantonio
MOTOGP 277