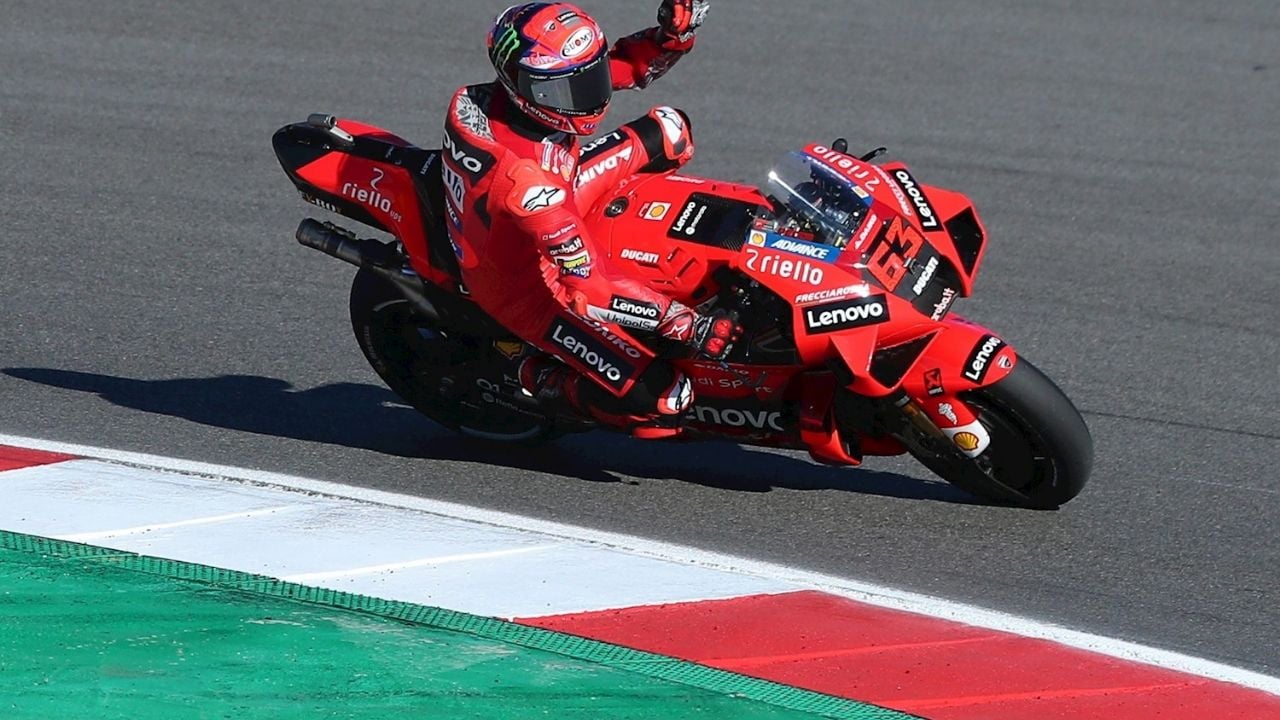 The Italian Francesco Pecco Bagnaia (Ducati Desmosedici GP21) added his third victory of the season by winning the Algarve Grand Prix of MotoGP in the Portuguese circuit of Portimao with great solvency, leading the competition from the first lap despite the fact that the test did not conclude with the established laps when the Race Direction showed the red flag two laps before the end.

At that moment the Portuguese Miguel Oliveira (KTM RC 16) and the Spanish Iker Lecuona (KTM RC 16), who later apologized to the Lusitanian for his action, went to the ground at turn 13, forcing the race to stop. so that the pilots could be served.

As 75 percent of the race established by the Sporting Regulations of the International Motorcycling Federation (FIM) for MotoGP had already been completed, it was decided to conclude it.

Bagnaia He had been the fastest in practice sessions and it was no coincidence that he was also the fastest when the red light went off, although in the initial meters his own teammate, the Australian Jack Miller, was chased by the Spanish Joan Mir (Suzuki GSX RR), although the Italian immediately sped up the braking on the inside and took a good few meters of advantage, with the new 2021 world champion, the French Fabio Quartararo (Yamaha YZR M 1), in eighth place.

With the passing of the laps the situation was consolidating in all its positions, Bagnaia firmly in the first place, the same as Joan Mir in the second, with Alex Márquez holding on to the front of the group that fought for the third step of the podium and in which was also Jack Miller, Jorge Martín, Johann Zarco and Fabio Quartararo, who ended up on the ground at turn five of the twenty-first lap, in what ended up being the first zero of a practically flawless season of the Frenchman, champion for the first time .

Behind them, just over a second, were the Spanish Pol Espargaró and Alex Rins, with the local idol Miguel Oliveira (KTM RC 16) in tenth position, which also did not have a good finish when being involved in an incident with the Spanish Iker Lecuone (KTM RC 16) in turn thirteen of the twenty-fourth turn, which ultimately forced the red flag by the Race Direction and the race was terminated when 75 percent of the route was completed and the final classification based on the order on lap twenty-three.

Tags: MotoGP, Francesco Bagnaia, ducati
What is the top speed record with a MotoGP?
Accident and positive case of alcohol for a MotoGP figure
The best way to enjoy racing
MOTOGP 703