MotoGP GP 2022: results and classification of the British GP 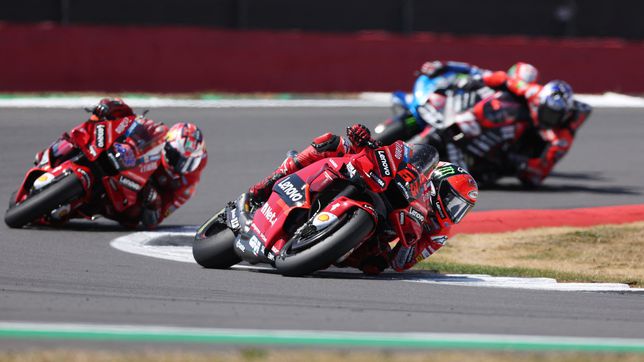 Silverstone has given us one of the best races of the season. Overtakes, crashes, comebacks... Bagnaia reigned in this chaos, who had to sweat vic

Silverstone has given us one of the best races of the season. Overtakes, crashes, comebacks… Bagnaia reigned in this chaos, who had to sweat victory. First with Miller, then with Rins and finally in a fatal duel in the last two laps with Viñales. The Catalan is reborn with his second consecutive podium. Miller completed the third drawer. Martín, fifth, lost the internal duel at Ducati on the last lap with Bastianini. Aleix, touched, has only lost a point with Quartararo, whom he managed to squeeze in the last meters.

Lap 1: Viñales goes wide and loses distance with Bagnaia! Bastianini overtakes Martín in the duel for being Miller’s successor at Ducati!

Lap 2: Viñales jumps from afar, passes Bagnaia, but he goes wide and the Italian recovers the position!

Lap 3: Viñales exhibition! The Catalan rider puts Miller’s bike on the inside and protects the gap at the exit! Next stop: Bagnaia.

Lap 5: Bastianini continues with his spectacular comeback. He has overtaken Quartararo and is already sixth.

Lap 6: FALL OF MIR! WHAT A SEASONAL DISASTER FOR THE MALLORQUIN! MARTIN GOES TO VIÑALES AGAIN!

Lap 7: Bastianini overtakes Aleix, who is suffering a lot physically. He plays minimize damage with Quartararo.

Lap 8: Viñales jumps from a distance and recovers position with Martín. Fourth place for the Aprilia.

Lap 10: They ask Aleix to put the “Mapping 2″. Attack mode for Granollers, which is eighth.

Lap 11: Three tenths between Rins and Bagnaia. Same distance between Italian and Miller.

Lap 12: Bagnaia passes Miller and goes for Rins, who is four tenths behind.

Lap 13: Mir overtakes Aleix, who is suffering. Viñales passes Quartararo and is fifth.

Lap 15: Rins passes Miller on the bend before the old straight! Rins is the leader!

Lap 16: Zarco goes to the ground when he was riding comfortably in the lead! He has not been able to withstand the pressure of the French!

Lap 17: Rins jumps inside and overtakes Bagnaia! Quartararo returns in fifth place, between Bagnaia and Viñales, after completing the Long Lap!

Lap 18: Miller breaks the track record in the race, held by Marc Márquez. Zarco rolls in the same tenth.

Lap 19: Behind the French are the Ducati of Miller and Bagnaia. Aleix rolls seventh in the wake of Viñales.

Lap 20: START THE RACE! BAD START FROM VIÑALES, WHICH GOES DOWN TO SIXTH PLACE! QUARTARARO PLACES SECOND AND RINS FIFTH!

Viñales can be of great help to Aleix in the championship. Stopping Quartararo or retaining Zarco so that he reaches Aleix are some of the strategies that the Figueras player can take.

Johann Zarco will start from the first position. Fonsi Nieto has assured that it is the weekend in which he has seen the French best since he has been inside the PRAMAC. Behind you will have a great Viñales, back with the Aprilia. Quartararo starts fourth and has to take a Long Lap Penalty. Aleix, injured after crashing yesterday in FP4, sixth.

Buenas tardes. Welcome and welcome to the live narration of the MotoGP British GP.