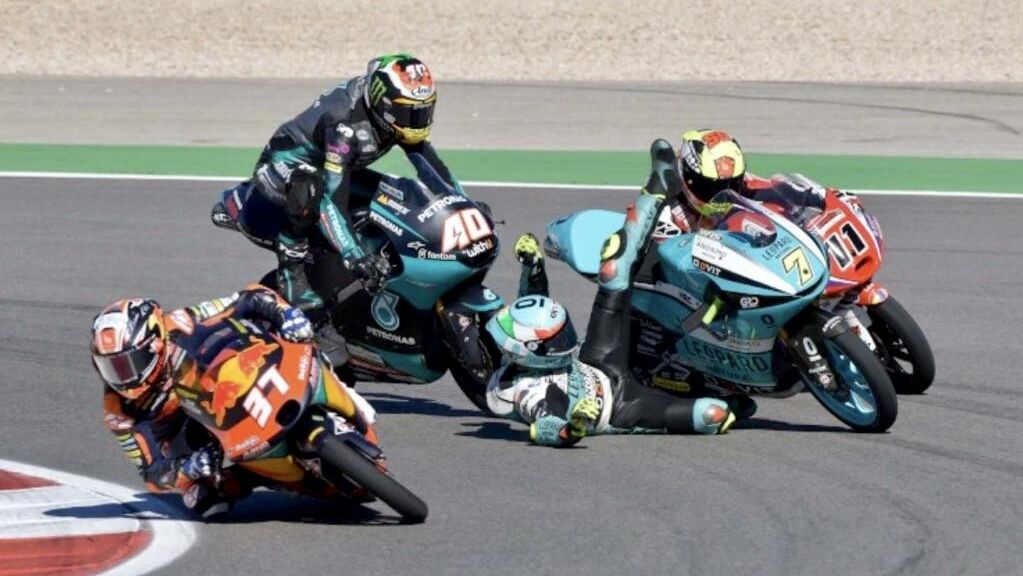 Darryn binder has become the center of all the criticism in the MotoGP World Championship after an incomprehensible action, a championship error th

Darryn binder has become the center of all the criticism in the MotoGP World Championship after an incomprehensible action, a championship error that ended the options of Foggia, also Honda, in Moto3. The South African rushed to pass Sergio Garca and Dennis on the last lap and took both of them ahead, leaving Pedro Acosta (KTM) free to the title.

Own Foggia did not even want to accept his apology when he went to his box at the end, after being disqualified. Then, it was dispatched to taste. “I knew he had a good pace and I could get away. If I was first, Pedro could be second or third and that was not enough. So I preferred to stay in the group, so that he would come closer and we could have a bit of a fight. I hit once and in the second I couldn’t hold it. It is surprising because next year I will be in MotoGP. It is not the first time it has happened to him. Is not a great resume for him. The fact is that I was playing the championship. I knew where to overtake Pedro, where he was faster, but I didn’t show him because they pointed out that he was behind, so I didn’t show him where he was stronger, “he said. With the Murcian he did hug and congratulate him on the crown.

His team, the leopard, he sent out a harsh statement against the youngest of the Binder. “It is very strange how he behaved at that time. Your behavior is unforgivable. And it’s not the first time. It could have ended worse “, they reviewed.

Darryn and the RNF -heir of Petronas Yamaha- had already received many negative opinions due to the fact that he went directly from Moto3 to MotoGP in 2022 with his meager palmars -a single victory- and after yesterday’s incident they were accentuated, especially among the Italians. Bastianini it was quite graphic. “It was a stupid mistake, unworthy of MotoGP. What really I’m afraid of having to run with him next year, “he would blurt out.

Pecco Bagnaia asked the FIM and Dorna to measure F1 style to put a filter. “In the car championships they give you a super license that you only get if you are doing well in your competition. We have already seen many accidents of him. we are faster than him“, he proposed.

Morbidelli agreed with that idea. Valentino rossi, with nuances. “I don’t know about the superlicense, to me. it is better to go more pilot to pilot. Darry is very aggressive and sometimes makes mistakes that are not fair to others, “he said.

Aleix espargar it was equally hard. “The Darryn Binder thing has no name. One more, I don’t know what to say, it’s incredible. There are aggressive pilots who have changed like Fenati or Zarco He was one of the dirtiest in the category, but since the crash in Austria, he’s now aggressive, but hasn’t done anything serious. Darryn Binder is one after the other, now waiting for the Career Directorate to act. In MotoGP it should be more difficult to get there. Every time there is more equality of motorcycles and we are more together. The category should be protected, I don’t decide the rules, but I know you should have some idea about what to do, “he said.

Interestingly, the one to be your companion, Andrea Dovizioso, he doubts that he has the level to go to the queen class. “I think it is something that should never be seen, especially if there is a pilot playing a world championship. What he did was not correct, at a time like this you must be smart. Yes, it is complicated because you always go to the limit, but I think in For a moment like this, you must remain calm. Regarding his jump to MotoGP, we’ll see what happens. For many it is something strange, but it is a decision of the team. I think he has very good qualities, but I do not know if I will be at the height of MotoGP. Very often expectations are created and then the opposite happens, but the decision is already made, “he said.

The African only found the support of Jack Miller, Family’s friend. “These are things that happen. I have also done it sometime,” he asserted.