MotoGP: Jack Miller will return to KTM from 2023 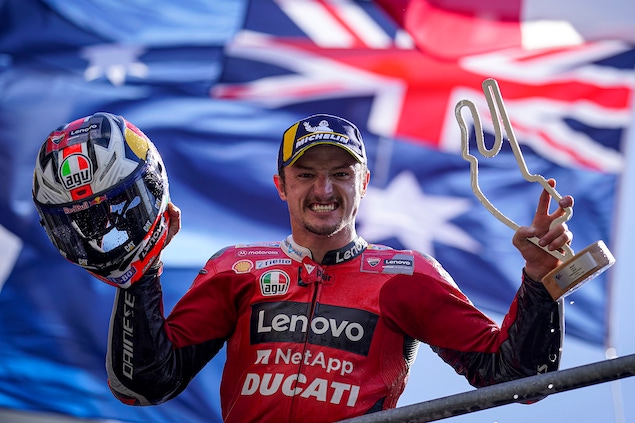 The future of the Australian within Ducati questioned during this year, both because of the contract extension that Francesco Bagnaia received and because of the performances of Enea Bastianini, member of Gresini Racing, in the first part of the World Championship.

After weeks of negotiations, this Thursday it was announced that Miller signed a contract with the Austrian house for 2023 and 2024, becoming a teammate of the South African Brad Binder.

In addition to being his return to KTM, with which he was runner-up in Moto3 in 2014, he will meet with Francesco Guidotti, former manager of Pramac Racing who joined the organization, in that position, since the end of last year.

“Having Jack alongside Brad on our team means we have another strong asset. I know him well, I know how he likes to work and what he can bring to boxing », Guidotti mentioned. “I think his character and the way he will ride and push our KTM RC16 will help us a lot at this stage of our project.”

“Like Brad, Jack is a pure racer: he will find the limits and the maximum of any condition and any pack and still ‘try’ to get the result and that is quite a rare quality. The next two seasons are going to be exciting!”

Miller turned 27 last January, but he already has more than a decade of Grand Prix experience, taking nine wins and almost 30 podium finishes in Moto3 and MotoGP. His debut in the stellar was in 2015 and in the last five years he has ridden Ducati machinery.

From 2018 to date, Jack has achieved 16 podium finishes with the Desmosedici GP, including two wins with the factory team at Jerez and Le Mans in 2021. He helped the house of Borgo Panigale to the Constructors’ titles in 2020 and 2021 and Teams last season.

“These have been five very important years for me: together with Ducati I have achieved several podium finishes, including two victories that I will never forget,” said Miller. “In addition to the two constructors’ world titles and the team title, last year I finished fourth in the Championship, and that was my best result in MotoGP.”

Together with the Pramac Racing Team and the Ducati Lenovo Team, I have grown a lot as a centaur and year after year, I have always felt like the best version of myself. Next year I will take on a new challenge, but right now I just want to think about finishing this last season with my team in the best way possible.”

“I thank all of Ducati Corse, my team, Gigi, Paolo, Davide, and the people who have worked with me during these five seasons.”