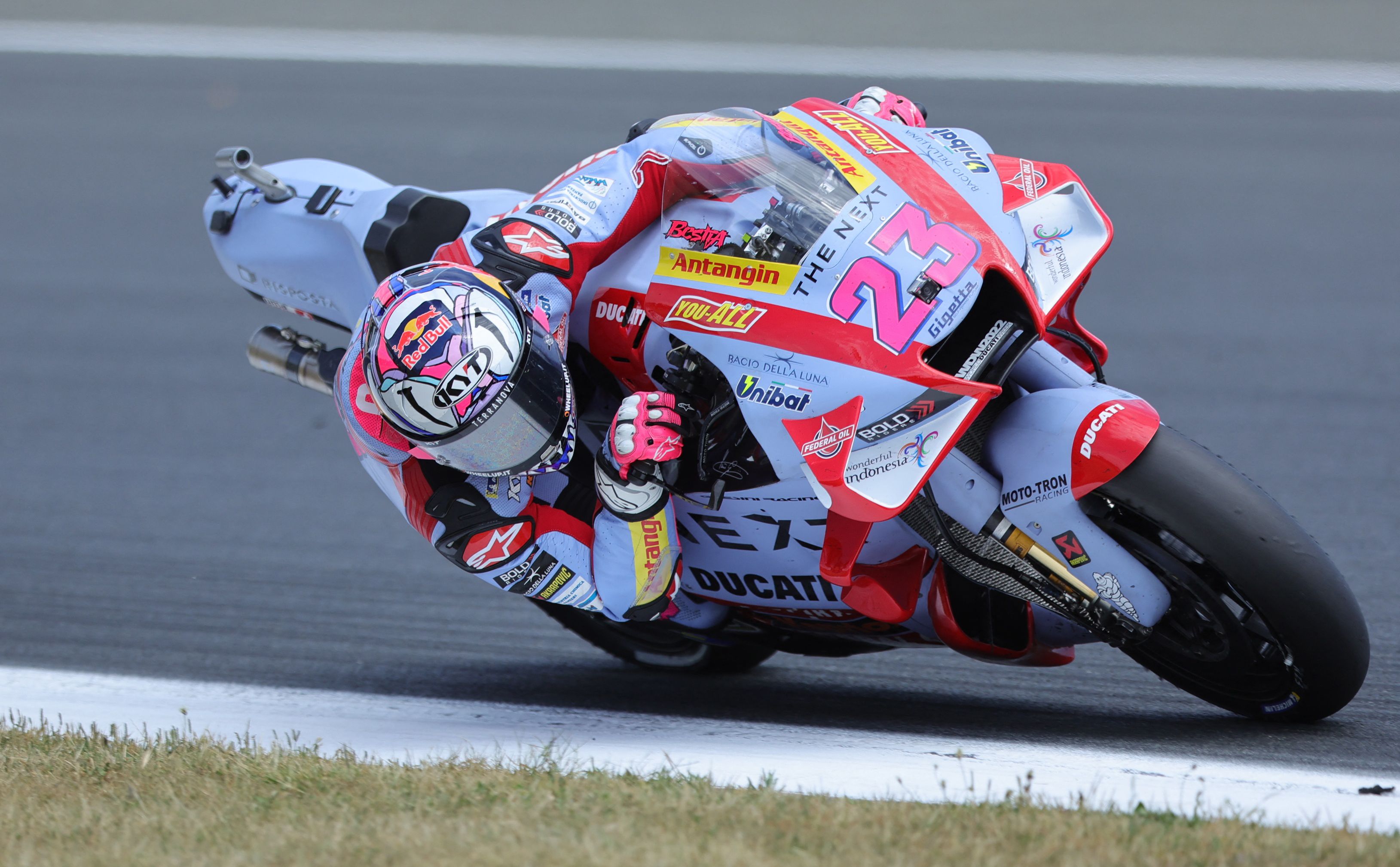 Enea Bastianini climbs for the third time this season to the top of the podium in the MotoGP category; they accompany the Italian Ducati rider of the Gresini Racing Team, Jack Miller with the silver and Aleix Espargaró owner of the bronze.

Enea Bastianini (Ducati – Gresini Racing MotoGP) has achieved her third victory this season, the third in the MotoGP category and the ninth in her racing career in the Motorcycle World Championship.

Francesco Bagnaia falls down!! The
poleman of the French GP goes to the ground!! And with the fall of the Ducati Lenovo Team rider, Aleix Espargaró gains a place and is placed third in podium position.

Finally some action! Finally overtaking that give us goosebumps! Enea Bastianini decides to put a wheel on Francesco Bagnaia and enter the fight for first place. Bagnaia fights back, although he sneaks in and Bastianini regains the provisional lead of the race at Le Mans.

Another fall! One more, another from a Spanish pilot. In addition, his Pramac Racing Ducati caught fire. What a drama!

Joan Mir falls!! Suzuki’s second crash in the French MotoGP GP!! Joan Mir, who occupied the fourth provisional place, the address is closed and ends up on the ground.

Enea Bastianini (Gresini Racing MotoGP), who prides himself on being a second-round rider, has shaken off Jack Miller to occupy provisional second place in the French GP, +0.562 behind Francesco Bagnaia.

A new fall, this time, starring Raúl Fernández. The Tech3 KTM Factory Racing rider joins the list of retirements from the MotoGP French GP, which is completed by Álex Rins and Remy Gardner.

Jack Miller and Francesco Bagnaia, partners in the Ducati Team Lenovo, fight for the first position of the MotoGP French GP. At the moment, the
poleman He has regained the first position, leaving +0.512 of the Australian.

What a pity!! Álex Rins was in third place when he slipped into turn 3 and ended up crashing at turn 4, when he intended to join the French MotoGP GP race.

Arón Canet (Kalex) knew how to take advantage of his opportunities and despite still having a lot of discomfort due to the broken wrist for which he underwent surgery before the race at the “Ángel Nieto” in Jerez de la Frontera, he got a more than worthy second position, his second consecutive podium.

The world leader, who was with the leading group, had to settle for the seventh final position, but has 112 points in the championship, seventeen more than Jaume Masiá and the Italian Dennis Foggia (Honda), with Izan Guevara fourth behind 23 points.

The Bugatti circuit is located 5 kilometers south of the city of Le Mans and 200 kilometers southwest of Paris. Built in 1965, around the existing track of the 24 Hours of Le Mans, this circuit with mythical resonances has been the scene of Grand Prix since the end of the sixties. The serious accident suffered by the driver Alberto Puig in 1995 caused Le Mans to disappear from the World Championship calendar until the 2000 season, while various improvements were made to the safety of the track.

Its narrow track is characterized by sharp curves that force a piloting that emphasizes the rush of braking and sudden acceleration. With a capacity to comfortably accommodate more than 100,000 spectators, the circuit is also the scene of various endurance events of all the specialties of the motor world, as well as various events of the French championships.

Bastianini, in the satellite team Gresini, already has two victories so far this season and is third in the MotoGP championship, which is why the Ducati managers have already set their sights on him thanks to the results achieved at the handlebars of the prototype from last season, the GP21.

The race in the MotoGP category for the Spanish Grand Prix at the Bugatti racetrack in Le Mans, the seventh round of the motorcycling world calendar, can be followed from DAZN and Movistar +. Also, minute by minute, through the La Vanguardia website.

Both Mir and Rins star in a constantly growing start to the championship, with the second of them in fourth position and the first in sixth. Both need to endorse that behavior with a victory, but it is not at all unreasonable to think that sooner or later they will climb to the top of the podium.

“Suzuki Motor Corporation is in talks with Dorna about the possibility of ending its participation in MotoGP at the end of 2022,” recognized the official Suzuki team, days after rumors of his imminent departure.

His teammate, Pol Espargaró, has it somewhat more complicated and except for the podium in the inaugural race in Qatar, he does not finish getting the performance out of his Repsol Honda RC 213 V, which has him in the “trigger” (there are rumors that they could have informed him that they do not have him from 2023) in terms of renewal and even more so when the Suzuki drivers, the Spanish Joan Mir and Alex Rins, have already been informed by the Hamamatsu manufacturer, who retires from competition at the end of the season.

The only objective of Fabio Quartararo is to have the necessary weapons to be competitive, the main reason for putting pressure on Yamaha, which has its sole and main defender in the Frenchman, since neither the Italian Franco Morbidelli, from the official team, nor the South African Darryn Binder and fellow Italian Andrea Dovizioso, from the satellite squad, are performing at the level expected of them, although in the case of the African he has the benefit of being a rookie in the category, which grants him certain “favors”.

Frenchman Fabio Quartararo (Yamaha YZR M 1) arrives as the leader of the championship at the French MotoGP Grand Prix that takes place this weekend at the Le Mans circuit, where he will have to carry out many of the pending duties.

Quartararo already knows what it means to win, as he did it with some clarity in Portimao (Portugal), but he barely accumulates a seven-point advantage over his immediate pursuer, the Spaniard Aleix Esparargaró and his Aprilia RS-GP, the true protagonists of this start to the season by the great performance exhibited by the duo.

The French Grand Prix race in the MotoGP category, which takes place at the Bugatti racetrack in Le Mans, will take place at 2:10 p.m. (Spanish peninsular time).

It seems that the arrival of the championship in Europe has been clearing up the panorama in the MotoGP category a little more, mainly for the current champion Fabio Quartararo who, despite his initial problems with his bike, has shown himself to be the most regular in these first two continental appointments and has managed to take command.