MotoGP lives its tightest ending since 2017 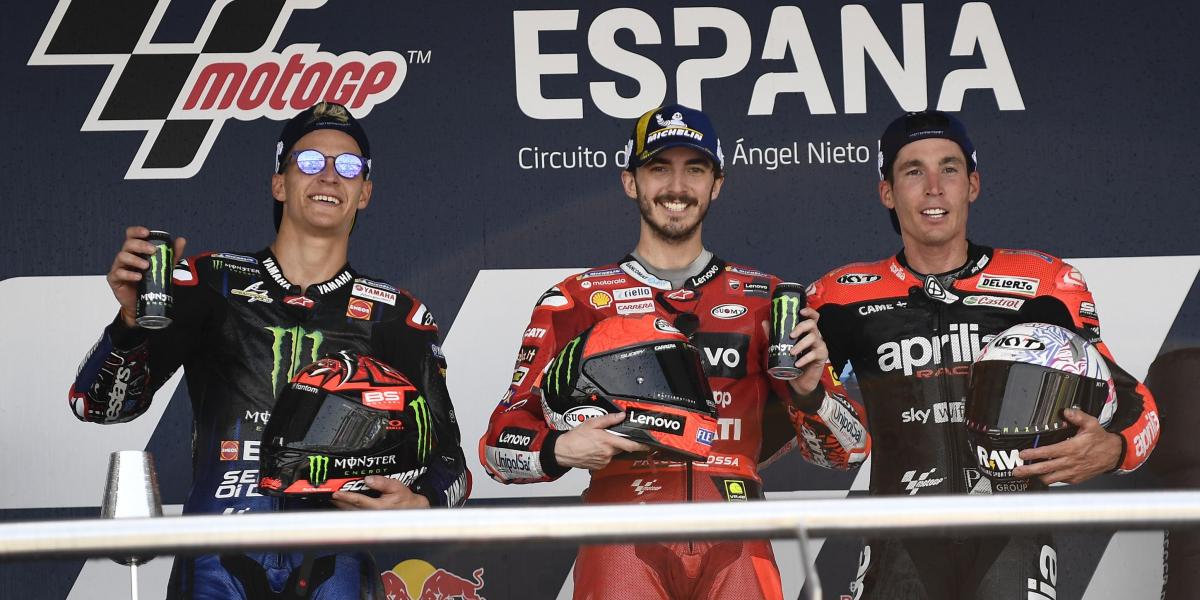 MotoGP lives its tightest ending since 2017

Since 2017 the MotoGP World Championship has not been resolved in the last race, traditionally in the Comunitat Valenciana circuit Ricardo Tormo de Cheste, and this 2022 is on the way to repeat history. The three most regular riders on the grid, within their own irregularity, arrive at the Motegi race this weekend separated by 17 points when the last four remain for the conclusion.

Fabio Quartararo, uninterrupted leader since the fifth Grand Prix in Portugal, has seen how his cushion, which reached 34 points after Sachsenring, was dramatically reduced this weekend to 10 points over Pecco Bagnaia and 17 over Aleix Espargaró, who in turn carries with the extra slab of the 9 points lost due to his error in Montmeló, otherwise it would be 8 that would separate him from the Frenchman.

In 2017 with four races to go, which then were not held in such a short space of five weeks, 16 were the points of the leader Marc Márquez over Dovizioso and 28 over Maverick Viñales. At the end of the campaign the order was maintained with Márquez winning the title by 37 points over ‘Dovi’ and 68 over ‘Mack’.

Quartararo has signed two zeros for two sets of racing, in Assen on the fifth lap, a precipitation in which he took Aleix Espargaró ahead, whom he threw off the track, and in Aragón due to the adrenaline of the first race curves not He let him calculate all the possible variants in the face of frights and ended up crashing into the driver who preceded him, Marc Márquez.

“Falling in the third corner wasn’t the best thing. We’ve had some tough last races, but I’m motivated to do more in the next few races”, the still leader Fabio Quartararo settled the tough day.

Nor was it a perfect weekend for Pecco Bagnaia who was already close to his fifth win in a row when the Italian Enea Bastianini decided to take revenge for his loss in Misano and this time he overtook him on the last lap. He probably weighed the race for the title to have fought ‘The Beast’ for a little more victory. But in the last five Grands Prix he has cut the Frenchman a whopping 81 points.

“These ten points are the smallest difference I’ve had since the year started. We’re close”

“The important thing this time was not to make mistakes, because Fabio’s accident gave us the opportunity to recover a lot of points. Now, the World Cup is much clearer. These ten points are the smallest difference I have had since the beginning of the year. We are close,” Bagnaia said.

“I will think about the title but not too much. I know that in Japan it will not be easy, because we have less time to prepare the bike,” he said, and that is that the Japanese GP will have one less free practice session on Friday and there will only be an evening session to give time for all the material to reach Motegi from Aragon as a stop on Friday morning in case of delays.

And faith in the title continues to move the irreducible Aleix Espargaró who in Misano lost second place in the World Cup at the hands of Bagnaia, but in a GO he has seen how the 33 points he lost with the French have been reduced to 17.

“The three of us reached the end very tight and it’s very nice, we’re back in the game”

“All the points are very important. In fact, when I saw ‘Quartararo out’ on the dash, instead of saying ‘you have to relax’, quite the opposite. What was the use of finishing fifth or sixth? nothing. So I’ve risked a bit more. Besides, it’s good for my confidence, before I flew to the tour, a podium was very important and we’re back in the game,” he explains.

And he doesn’t get wet when asked who of the two he sees as more of a rival: “I don’t want to be opportunistic, but I’ve always believed. In fact, when I saw Pecco starting to win a few races ago, he told me: ‘Perfect, let him come, better, more pressure, more show’. And it’s having an effect. We’re all very close, Pecco is doing very well, but he has almost my points, I’m very close to the first, so I’ve always believed. It’s true that Fabio makes few mistakes and that having a zero from him here is not what I expected, but the championship is the bomb. The three of us reached the end very tight and it’s very nice”.