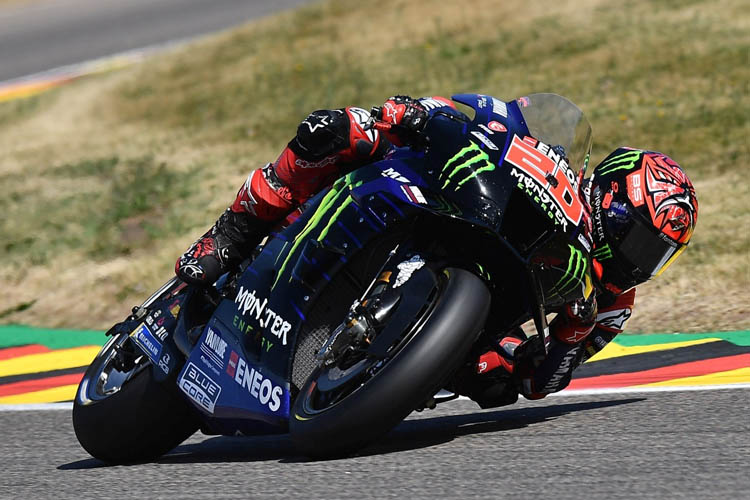 I don't think anyone is going to argue that the strongest rider in the category this year is being Fabio Quartararo, but if in addition, their most

I don’t think anyone is going to argue that the strongest rider in the category this year is being Fabio Quartararo, but if in addition, their most direct rivals do nothing more than rule themselves out of the fight for the title, then we have the perfect scenario for good old Fabio to inevitably slip away in the standings. In Germany, Fabio did not have it all with him, and he knew that the only one capable of spoiling the party was Bagnaia, but Peco made a mistake in the first few laps that caused him to crash for the fourth time in 10 races, and with it, in addition to leaving the race on a platter to the Frenchman, also allowed him to escape in the general classification in an overwhelming way.

As in Moto3, this championship can only be lost by Quartararo himself, because as soon as he controls it as he has done so far, he is going to take it to the streets. It is true that there will be races in which he will have to do second, third, or even fifth or sixth, but he will score points, and will continue to lead waiting for the circuits where his Yamaha is stronger, and there he will be relentless, just as he has been in Montmeló and in Germany. This has been the Frenchman’s third victory, as many as Bastianini this year, and yet the Frenchman has 72 points ahead of the Italian. What is the difference then? Well, it’s very simple. On a bad day, Bastianini finishes on the floor, or 12th, and on a bad day for the Frenchman, he finishes fifth. There are the 72 points of difference.

Fabio Quartararo has achieved a victory of leader and champion and advances towards his second MotoGP title.

fabio quartararo: The Frenchman was enormous in Germany, knowing that Bagnaia had a better pace than him, he insisted on passing him in the first corners to prevent the Italian from imposing his pace, and thus not only contained him, but forced him to commit the mistake that ultimately ended his career, and by the way with his championship aspirations, if he still had any left. That said, the Frenchman was masterful, who then limited himself to riding at his pace and controlling the distance with his compatriot Zarco who was riding in second position, but without giving the impression of being able to disturb Fabio at any time. As they say in his land, Chapeau !!!

johan zarco: The Frenchman seems to have woken up in the last two races. Is it because now is when the contracts are being closed for the next two seasons? The least is suspicious, but outside jokes, the Frenchman benefited in Montmeló from Aleix Espargaró’s shit, and in Germany from Bagnaia’s gift, but as I always say, to receive a gift, you first have to be there to pick it up, and the French has been. We’ll see how he does in the next races, and how he positions himself for next year.

Jack Miller: Another one who has woken up late in this championship, despite the fact that this result is what he should be contractually obliged to do in each race. Jack announced this week his departure from the official Ducati team, to sign for the official KTM. Perhaps the fact of having a seat already confirmed for next year has taken the pressure off him and has made him drive as he knows how, without the pressure of having to achieve results in his current team. 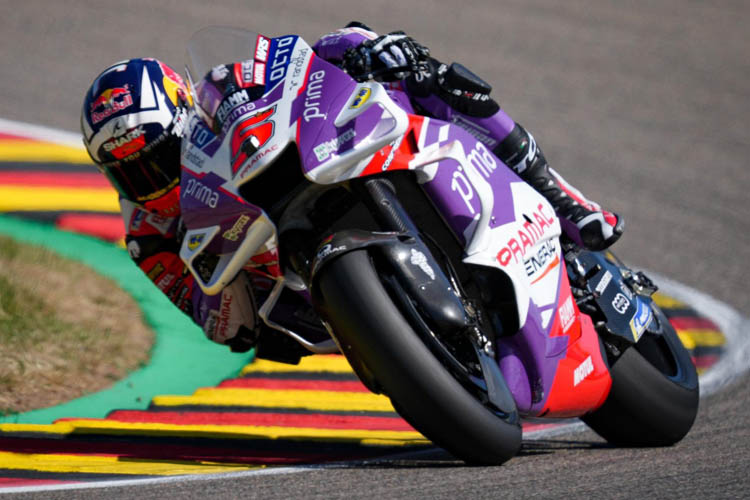 Aleix Espargaro: The eldest of the Espargarós did not have the best of his races in Germany, and in truth he was not seen to be capable, neither he nor his Aprilia, of worrying the frontrunners at any time. He was riding third for most of the race, with his teammate Viñales on the wheel, and clearly ordered not to overtake him, until Miller came up from behind, and passed him without him being able to do anything. Bad weekend for Aleix, who nevertheless saved with a good fourth place and a good handful of points that allow him to be there even in the fight for the championship.

Very good fifth place for Luca Marini, who has been getting into the top 6 in the last 3 races. Valentino’s half-brother is showing impressive progress in recent races, and the cheetah is quietly getting into the best. Good for the Italian.

Well also Martín after his operation on his arm to correct problems that he had dragged on for a long time, and more knowing that the second official seat in Ducati is being played, along with Bastianini. What happens in the next races will be decisive to know who will take that seat, and regularity will be important. At the moment in Germany, Martín has beaten Bastianini by a landslide.

So that you do not say that I have a mania for Viñales, comment that in this race he has finally been seen near that rider who won races with the blue Yamaha motorcycle, and has been running fourth behind his teammate for many laps, until a problem with the shock absorber on his Aprilia forced him to retire. Good for Maverick, who has needed about 20 races or so to get to the top positions, and with a bike developed by Aleix Espargaró.

To finish, I would like to make a couple of reflections, which go hand in hand with one another.

If we take the classification of this weekend’s race, we see that the winner was Fabio Quartararo, with the Japanese Yamaha. Well, from second place to 12, all the other bikes are European. which leads me to think If not, what has happened at other times with other brands will also be happening at Yamaha, that is, what happened with Stoner at Ducati, or what is happening at Honda with Márquez.that is, there is a motorcycle that works in the hands of a rider, but the rest are unable to drive it or get any performance from it.

In any case, what is happening in the category is unprecedented, and it is clear that there is a change of direction. Before, a championship was inconceivable without the Japanese brands dominating, and today that tide has turned, and the Japanese factories are suffering, if it weren’t for those special drivers who are able to win with them. I am sure that if today we asked any rider about the machine they would choose for next year, most would opt for one of the 3 European brands, and few would bet two years of racing on a Japanese bike today.

In the Yamaha factory team there is a free seat, because Quartararo has renewed. In the factory Ducati there is another free seat, because Bagnaia has also renewed. In the Red Bull KTM they also have their two confirmed seats, since Binder continues, and Oliveira, who leaves his seat, has already been taken by Miller. Those that also remain are those of Aprilia, Aleix and Maverick. The rest is all up in the air. We will see what movements there are this summer. Things get very interesting…..

Behave well, do not do anything that I did not do, good routes and remember, keep your butt on the seat and your feet on the footrests!!!!

Final MotoGP calendar left with 18 rounds; Argentina, canceled
Aprilia bets on a “completely new bike” for 2022 in MotoGP
Iker Lecuona leaves the MotoGP World Championship to race in the Superbike in 2022
MOTOGP 639