MotoGP | Rins: “Spencer is too old for the ‘stewards’ panel” 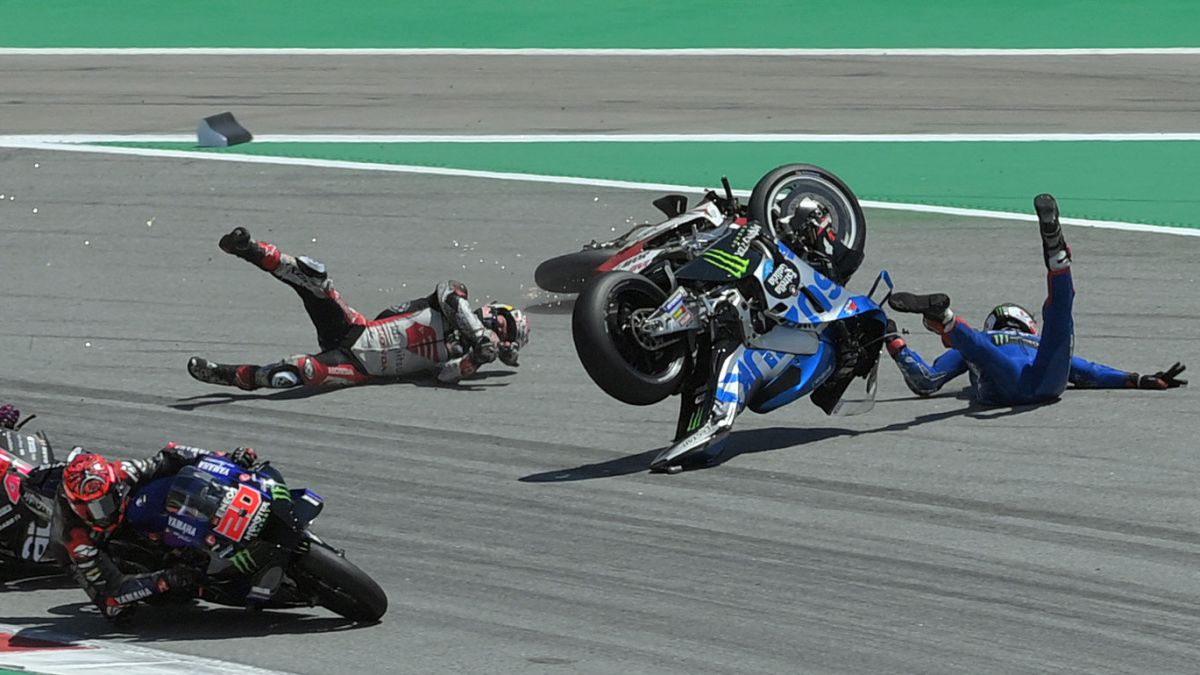 Álex Rins's harsh criticism of Spencer and the panel of stwards or commissioners captained by the three-time world champion. He does it because h

Álex Rins’s harsh criticism of Spencer and the panel of stwards or commissioners captained by the three-time world champion. He does it because he doesn’t understand why Nakagami wasn’t sanctioned after he shot him and Bagnaia after the start of the Catalonia GP, at the end of the straight.

-What can you tell about a career that has lasted so little?

-First of all I hope that Nakagami is very well. What he has done is very bad, crossing the track, braking so late, taking two riders ahead, but I hope he is fine. From what has been seen in the images, he has thrown Pecco with his head. Although what is unacceptable and inadmissible is having the ‘stewards’ (commissioners) that we have. And maybe the Race Direction, because Mike Webb is there with the stewards. That there is no future action on the incident is very strong… It is very strong because, putting aside the Mugello incident, on which there are many points of view, people who believe that Taka was the one who shot me, people who can see that it was my fault for not moving away, it is unacceptable that they do what they do. Of course I’m going to put pressure, I’m going to talk to Carmelo (Ezpeleta). This has been discussed in the ‘Safety commission’. In this Friday, in Montmeló, we were talking about the Mugello incident, and then we continued talking about experiences that other riders had had with the ‘stewards’ in the past… About things. And it is unacceptable.

– What have been based to do nothing?

-Well I do not know. I don’t know what they were based on. Livio (Suppo) has gone to talk to them… What they have shown is that they do not have the level to be in the MotoGP championship. Until something big happens, nothing will happen. Today they have left me without options for the championship, and Pecco too, they have killed this championship for him. What’s done is done, and let’s see what happens in the following races.

-How is the hand?

-I have had an X-ray done at the circuit hospital and it seems that I have a small fracture. Now I’m going to go to the Dexeus to check it out, but I don’t have any movement up and down… We’ll see what happens. I already tell you that the decision they have made does not seem normal to me. As I said before, there are two things: there are very aggressive drivers on the track, but if the ones at the top, the ones in control, don’t do anything about it, there’s nothing to do.

-What kind of people should be on that panel of stewards? Because Freddie Spencer was a pilot…

-He has shown that he is too old to be there. Someone younger, I don’t know, who has competed in this new era, someone who has recently retired. I do not know. But I ask you: what experience do you have?

Livio Suppo, present at the Rins meeting with the journalists, wanted to point this out: “I went to the Race Direction to speak with the stewards. They told me that for them the accident is a racing incident, and I have replied that this is unacceptable, that it be considered something like a racing incident. I think the two, Alex and Pecco, deserve to know how big of a mistake he has made, because it is clear that he has made it. It is very easy by looking at the pilot’s telemetry, to see how many more meters he has made. He has crossed from the right to the left of the circuit, and if you talk to Pol (Espargaró) he can surely tell you something, because television has seen how he was about to eat him up. normal racing incident… For us it is unacceptable. Mistakes can be made, but this is unacceptable.”

MotoGP results: starting grid for the GP of the Americas
MotoGP : Binder leads FP1 with Honda and Suzuki ahead
Maverick according to Maverick – Sport-Journal
MOTOGP 639