Movistar Inter, 45 years on top of the world 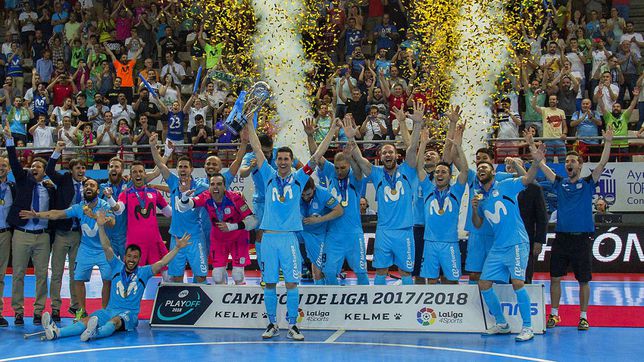 The history of Movistar Inter is considered the heritage of Spanish futsal. It was in 1977 when José María García began a sports project that has

The history of Movistar Inter is considered the heritage of Spanish futsal. It was in 1977 when José María García began a sports project that has lasted over time and has already lived for more than four decades. Being the most successful futsal club in the world, the legend of Movistar Inter takes on even more heroism and romanticism. Always with a very marked club philosophy, the Torrejón team will start this new campaign with the obligation to reap some of the titles at the national level, after the debacle last year in the League play-offs.

With no less than 61 titles throughout its history, they dominate the world scene with an iron fist. Fourteen League titles, the last being in the 2019-20 season, enjoying a golden period between 2013 and 2018, when they won five Leagues in a row, 11 Spanish Cups, 14 Super Cups and 5 Champions League (the last in 2018), cup the podium of the best club in the world. Regarding the coaches, many of the best in the world have led the Madrid team: Ángel Vilda, Manuel Saorín, Javier Lozano, Chema Cruz or more recently, Jesús Velasco.

In addition, Inter has been characterized by getting involved in many solidarity projects and with the idea of ​​promoting futsal wherever it can, such as the Movistar Megacracks Tour, in which futsal is brought closer to the little ones while they are imbued with the values ​​of the sport and camaraderie. With all this, Inter Movistar is much more than a futsal club and from the Jorge Garbajosa pavilion it will seek to reverse the current situation and end its 45th anniversary with a title and a better taste in the mouth.

Loading...
Newer Post
The construction of the new boxing gym in the Once Center advances
Older Post
LIV Golf players will not be able to play the FedEx Cup Playoffs