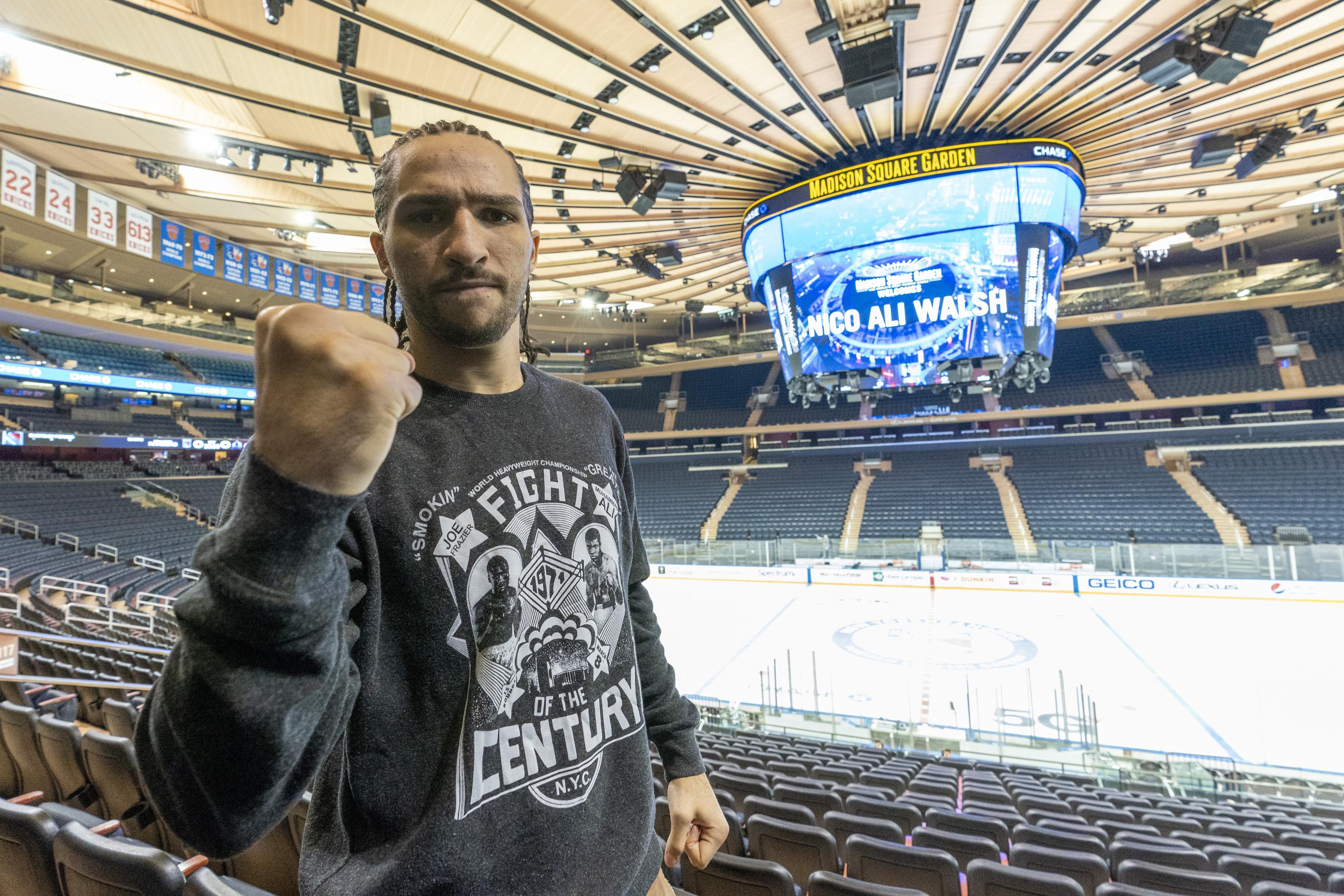 NEW YORK (AP) - Nico Ali Walsh gazed at everything from an old ticket to a scale. He was enchanted by the relics of some of boxing's greatest figu

NEW YORK (AP) – Nico Ali Walsh gazed at everything from an old ticket to a scale. He was enchanted by the relics of some of boxing’s greatest figures and functions.

Except for one image showing his grandfather receiving a hard left hit to the head from Joe Frazier.

Muhammad Ali’s grandson followed in his footsteps in boxing. And on Saturday, he’ll emulate it, stepping into the ring at Madison Square Garden, where the great fighter did everything from fighting the “Fight of the Century” to serving as a guest referee at wrestling’s first Wrestlemania event.

“This place has sentimental value,” Ali said. “If I weren’t related to my grandfather, being here would also be something super special, just because of the story. But the fact that he fought here and I haven’t really gone to places like that where he has been, it’s something more special, and I think my family will think the same when he comes here. “

Ali Walsh (2-0 with two knockouts) will fight in what will be the first boxing performance at Madison Square Garden in two years. The card is headed by the fight in the lightweight division between Vasiliy Lomachenko and Richard Commey.

Growing up in Las Vegas, Ali Walsh had never visited New York before this week. He looked like just another tourist on Wednesday, when he inspected the interior of the famous arena.

But his name was displayed in the enclosure, just as that of his grandfather or Laila Ali, daughter of the famous boxer, appeared so many times.

“I never imagined this would happen. It’s amazing, really special, ”said Ali Walsh. “As I said, it is not only special because I am a boxer and because this is my career, but for sentimental reasons. This is where my family was. Even my aunt fought here. So I just continue with the story. It is a really special moment ”.

The smallest theater within Madison Square Garden has hosted three recent boxing functions, but this is the first in the main venue since the pandemic prevented or limited fans from the events.

The New York Knicks in basketball and the Rangers in hockey have long been back, as have concerts.

Now it is boxing’s turn.

“It’s great to just have the fans back in this building for all the events,” said Joel Fisher, executive vice president of events and operations.

Ukraine’s Lomachenko, a two-time Olympic champion, has drawn crowds to the Garden before. However, the biggest fights now take place in Las Vegas, unlike when Ali was the star of the sport.

Ali fought eight times in the New York arena. He won those fights, except for the first with Frazier, on March 8, 1971. Frazier dropped him in the 15th round and prevailed by unanimous decision to retain the heavyweight title and hand the star his first loss.

Wearing a T-shirt that read “Fight of the Century,” Ali Walsh toured the venue and said he found it difficult to look at the photo of Frazier’s powerful blow that knocked down his grandfather. However, he stressed that something good came out of that defeat, avenged by Ali at the Garden in 1974 before taking the third fight in the Philippines.

“If he hadn’t lost that fight, if he had won it, we wouldn’t have had the ‘Thrilla in Manila’ show. We wouldn’t have even had the second fight with Frazier, ”Ali Walsh said. “So everything happened for a reason. These were some of the biggest fights in boxing, one of the best trilogies in boxing. “

Ali Walsh, 21, is a long way from achieving such a thing. He turned professional only in August, and his fight on Saturday against Mexico’s Reyes Sánchez (6-0) is only four rounds away.

Ali’s grandson used to show videos of his training to his grandfather, who died in 2016. Ali insisted on the importance of moving and dancing, part of an arsenal that made him stand out from so many fighters who came sooner or later.

“I remember him saying that he would not miss boxing, but boxing would miss him. And I really think that makes sense now that he’s gone, ”Ali Walsh said. “His shadow continues to be cast over the sport of boxing, so it’s not just that they compare me to him as his grandson. Everyone is compared to him, because he is boxing and he had a very big impact on this sport. “

Ali Walsh did not realize the magnitude of that impact as a child. It is clear to him now, when Rasheda Ali’s son has launched his own career.

Some fans in the arena have chanted: “Ali.” Others at home have wept over what the surname evokes from their own families.

“Certain people have told me that they saw my first or second fight with their parents, who used to watch my grandfather’s fights with his parents. And they get excited, because this causes nostalgia, ”said Ali Walsh. “In a way, this brings my grandfather back and history repeats itself. It’s like my grandfather is here and he fights here. “

Loading...
Newer Post
‘Obradovic and Jasikevicius? They would be charged in two training sessions’
Older Post
“Florentino explained to me why Kroos was the signing of the century”