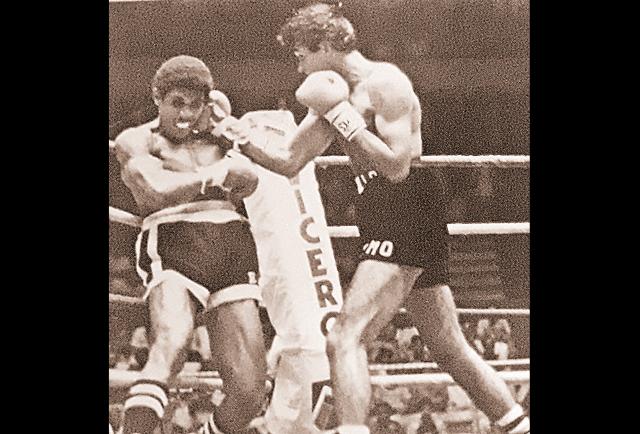 I recently came across some national boxing newspaper clippings from the 1980s and 1990s, where they had written about Antonio Ocasio, Julio Pastor Ruiz, Francisco ‘Rocky’ Fernández, Evangelio Pérez and Carlos ‘Púas’ Murillo.

At that moment I remembered the fights between Ocasio and Ruiz, especially the last one, because the next day I met the boxer from the capital at the then Revolución stadium, where a national athletics championship was being held.

Pastor Ruiz was satisfied with the result, mainly because he won, although he was still sore from the bruises he had as a result of the heat of the fight.

Likewise, I recalled the encounters between the ‘Lagarto’ Benedicto Murillo and the ‘Púas’ Murillo, and the ‘Sheriff’ Virgilio Chifundo with León ‘Fiero’ Salazar, both in the Arena de Colón, once converted into the maximum temple of the boxing.

Fights that aroused passions even before they took place, because they were ‘natural’ and even forced between figures of the patio, and because in some national titles were in dispute, an award that today is a thing of the Paleolithic era.

Along these lines, the most recent national belt disputes were in the 108, 115 and 126 pound categories in 2021. In all three cases, the disputes were disputed again, after five or six years of being they gave for the last time.

It is true, the ‘natural fights’ and the titles at stake were always a great attraction, particularly for the protagonists, because the bags were much more attractive.

If these two aspects were really part of the formula for the success of local pugilism, why do lawsuits of this magnitude not occur today in our country?

We must understand that the quality of a boxer is not only measured by his record and his technical qualities but also, and perhaps most importantly, by who he has faced in his career.

One who has something to say about it is veteran journalist Rodolfo Newland, who covered local boxing for a long time.

“Boxing is in one of its most critical moments. When in the history of our boxing, did you see stellar fights between two foreigners that nobody knows or few know? ”, He asked.

“You can see that in the WBA KO Drugs programs, which they do to make their role attractive, but never at the local level, which shows the crisis that exists,” said Newland.

He accepted that boxers train, but that does not indicate that there is a good level, mainly in professionalism, because “nothing is coming out of the quarries and the logical thing is that fights of this type cannot take place.”

“The other situation is that, as the quality has dropped, the managers try to get the most out of their boxers, sending them to the slaughterhouse without any experience or background and, sometimes, they spoil their careers,” he emphasized.

He recalled the time when there was great expectation to see Rodolfo ‘Bebe’ Francis, Reinaldo ‘Hormiguita’ Hidalgo and Rafael Ortega fight each other, and another not so distant one with Celestino ‘Pelenchín’ Caballero and Ricardo ‘Maestrito’ Córdoba.

“They were natural fights because they were between very similar boxers, in terms of qualities and ability, and therefore there was no clear favoritism between one and the other,” he said.

“Also because there was great expectation among the fans, who demanded this type of fight to decide who was the best. That is so important, beyond the fact that there was a title in dispute, ”he specified.

He stressed that the fight between ‘Pelenchín’ Caballero and ‘Maestrito’ Córdoba in 2004 was won by the latter “because he had more school (boxing) at that time, but in principle it was a natural fight due to the similar qualities of both”.

In that match, the national title of the super bantamweights was at stake, which was disputed for the last time in 2014, as proof of the lack of interest that exists from the promoters because they are disputed, and from the boxing commissions that they are carried out.

In Panamanian boxing there are also other factors, which I call ghosts, because they are not perceptible to ordinary fans, and one of them has to do with ‘fixed fights’.

In reality, they are not fixed fights because there is a collusion for a boxer to let himself win, but because the proxies request ‘easy’ opponents for their pupils.

The director of the WBA and former president of the Comibox of Panama, Miguel Prado, said that this happens, most of the time, because the promoter is also the boxer’s representative and seeks to take care of his career.

“The promoter does not want his boxer to lose because it is his business, and he is not going to bring someone where his pupil, at least on paper, does not have all the advantage, although the opposite may happen later,” he said.

In this regard, two examples were recorded on the billboard last May at the ‘Panamá Al Brown’ arena in Colón, where for a change, the protagonists of the main fight were foreign fighters.

In that function, the Panamanian Carlos ‘Arañita’ Ortega faced the Colombian Víctor Berrio (5-20), who came from 16 consecutive defeats, 10 before the limit. Logically, the paisa fell in two rounds.

The other fight was between the Isthmian Azael Villar and the Dominican resident in Panama, Yonathan Arias (17-19), who came from a year of inactivity and eight consecutive defeats. In order not to lose the habit, in that clash he fell in the second round.

But, this situation has not only occurred in Colón, although the ‘victims’ were, in this case, local fighters.

Last July, at the Coliseos de Combates, in Juan Díaz, Canadian Jack Hemmings (5-0) faced Jonathan Carmona from Chorrerano, with a record of 0-11 and three years of inactivity. No need to guess who won.

In that same month, but in the Los Andes shopping center, Mexican Diego Carmona (12-1, 11 knockouts) knocked out Panamanian Addir Sánchez in two rounds, who has not won for three years and from 2016 to date, has a record of 2-14-2.

On the subject, I throw several questions into the air.

Are foreign boxers required to undergo some type of general medical examination, endorsed by their respective boxing commission, before entering the ring?

Do locals undergo or are they required to undergo any type of general medical examination, beyond taking their temperature or blood pressure?

And, to any of these gentlemen, with negative records, are they required or is some type of sufficiency test made, so that this type of nonsense does not continue to occur?

At this point, I draw the attention of Pandeportes, the highest sports authority in the country, so that they take action on the matter before a tragedy occurs.

Loading...
Newer Post
NFL teams that have played in Mexico
Older Post
Troglio and the bombshell he wanted to put into Honduran soccer; he had ambitions to sign a former AC Milan player for Olimpia