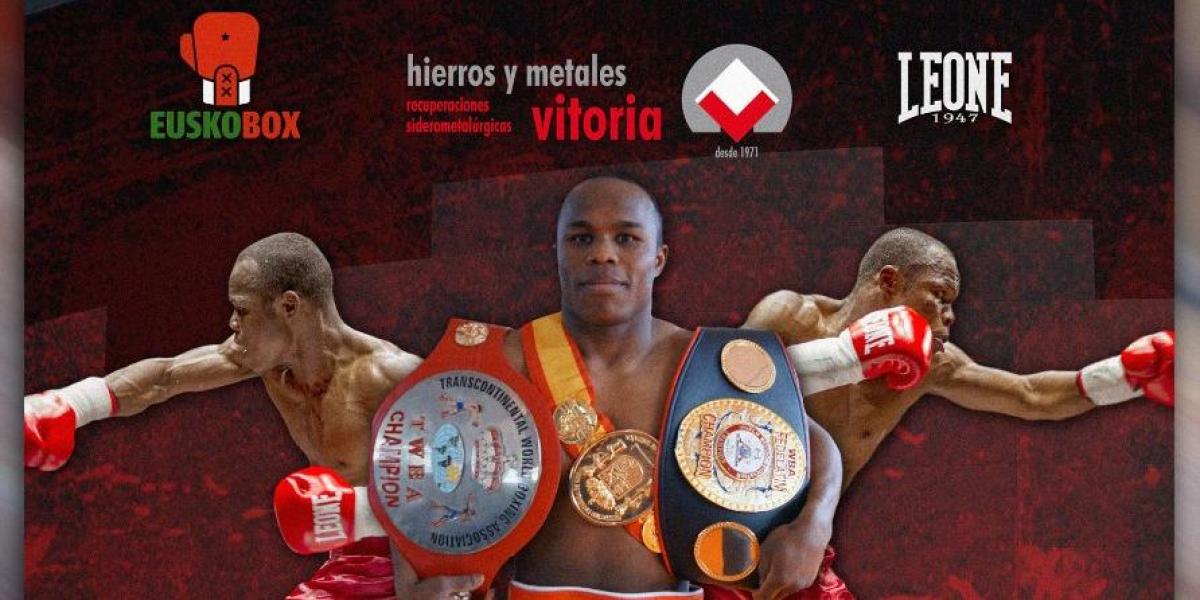 Next Friday October 22, Natxo Mendoza will step into the ring for the last time as a professional boxer. He will do it to measure himself in 6 rounds Hermin isava and to be able to say goodbye to the fans that have encouraged him so much with their gloves on. In almost two decades as a professional boxer, the Colombian based in Vitoria-Gasteiz has won a good handful of titles, they have faced several world champions and he has had real battles in different weights. The weigh-in of the boxers and professional fighters of the Friday evening will be held tomorrow, Thursday, October 21 at 7:30 p.m. in the restaurant Big Gate Berria, Renaissance square 1, Vitoria-Gasteiz.

Ignacio Mendoza Arroyo, came to the world in San Antero, Colombia39 years ago, in the bosom of a family in which one learned to stand guard rather than to walk. In his life boxing was a game, a sport and a trade. He stood out in the youth competitions of Montería and the region of Cordova. Drew attention to Colombia. He made his professional debut before reaching the age of 18 and won his first three suits on the fast track.

That same year 2002 he moved to Spain. A few months later he would settle in Vitoria-Gasteiz and I would start training with José Luis Celaya. The same coach who will go to his corner next Friday, October 22, in the ring set up at the Iradier Arena in the capital of Alava.

Mendoza met defeat in 2003. He did so in his eleventh clash and against a Levan Kyrakosyan that he would later be proclaimed European super featherweight champion several times. In 2005 he played the World Youth WBC of light weight in Nottingham, losing by close scoring in 10 rounds to the then undefeated JohnMurray, later dominator of the division in the British Isles and also champion of Europe among other titles. In 2007, the WBC Latino of the super featherweight was left without a true 12-round battle against Pet Petrov on Legutiano. The following year he knocked out the Uzbek prospect in six rounds in St. Petersburg Sherzov Nazarov. In 2010 it is measured in Wembley Arena to true lightweight terror in the British Isles, Kevin Mitchell. Natxo loses to a future contender for the world championship several times.

The already Gasteiztarra is compensated in August 2011 when, in the brand new Donbass Arena from Donetsk, with Michale Buffer As Master of Ceremonies, he knocks out the undefeated holder of several regional titles of the EBU, Volodymir Kravets with a WBA title at stake. In February 2012, Natxo fly to Moscow to play a true World Cup tie against a tough future super lightweight world champion, the “Hawk” Khabib Allakhverdiev.

After subsequently winning in Germany to the Argentine Ramón de la Cruz Seine, with IBF intermediate title at stake, Mendoza He would play a World Cup qualifying again, it would be in Kiev against the undefeated and then well-known Viktor Postol.

From that moment on, Nacho conquered and defended the Spanish superlight championship on a couple of occasions, offering great fights against King Daluz, Sandor Martín or Jonathan Alonso. And defeating tough Rubén in spectacular crashes Rodrígez already Fran Suarez, both in Bilbao, as in Barcelona, Madrid or in the same Iradier Arena.

That of Nacho mendoza It has been one of the most exemplary races in Spanish boxing in recent times. has garnered applause and recognition wherever he has gone and has been described as a “benchmark as a boxer and person”, in the words of Kerman Lejarraga; “It is a pleasure to have crossed me in the ring with you, you have been one of my most difficult rivals”, according to Sandor Martín, who agrees in the appreciation with a Petr Petrov you want them to “enjoy retirement” while Kiko Martinez he thanks him “for all that you have given to boxing.”

Next Friday, October 22, his last fight will arrive. It will be in 6 rounds before Hermin Isava. From the end of said combat, will continue with his trade as a specialized welder, who has always shared with boxing, and will mentor his brother Fran Mendoza (11-0), who, together with Tetef (2-0) also fights on Friday October 22 at the Iradier Arena.

The weigh-in of the boxers and professional fighters of the Friday evening will be held tomorrow, Thursday, October 21 at 7:30 p.m. in the restaurant Big Gate Berria, Renaissance square 1, Vitoria-Gasteiz.

Fought bear boxer in Russia; they induce him into a coma
Boxing Federation begins to lose illusion in its veterans
Jan Paul Rivera to go to the AIBA World Championship before jumping into rental boxing
BOXING 918

Loading...
Newer Post
Tom Brady and Dak Prescott, side by side in the MVP race
Older Post
The UFC notifies its foreign fighters that they will not be able to enter the US if they are not vaccinated