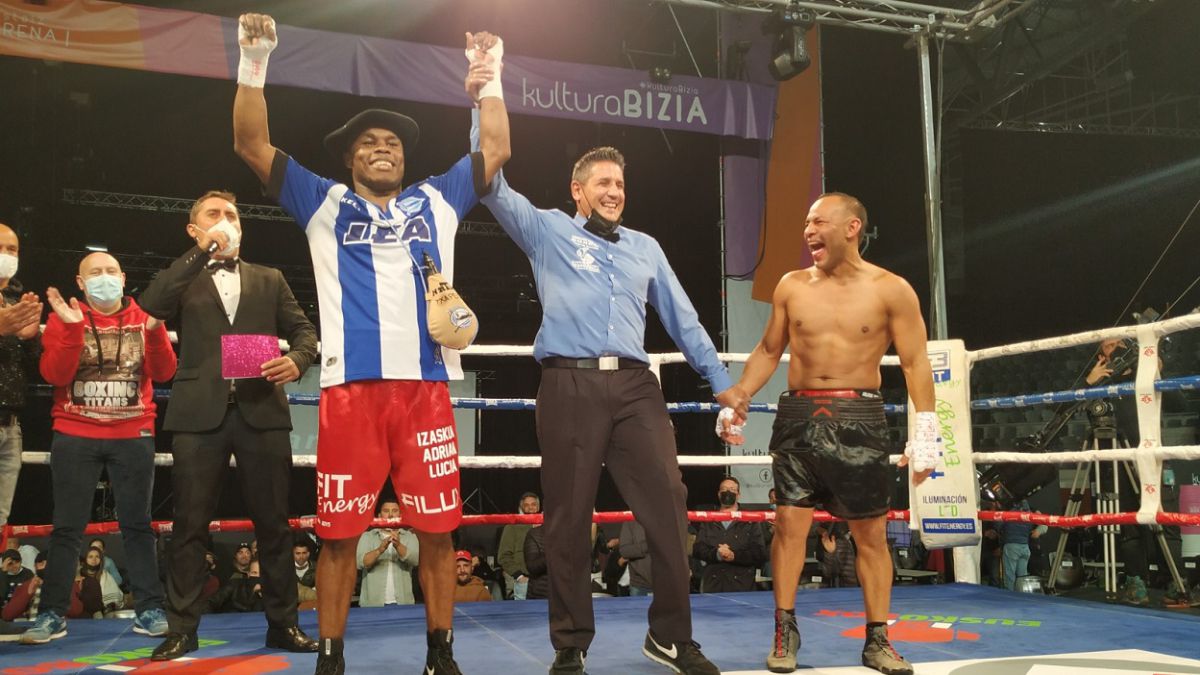 Natxo Mendoza enjoyed the preparation, the atmosphere and his fight in his farewell to professional boxing this Friday at the Iradier Arena in Vit

Natxo Mendoza enjoyed the preparation, the atmosphere and his fight in his farewell to professional boxing this Friday at the Iradier Arena in Vitoria Gasteiz. The three Mendoza won: Fran achieved his 12th victory in as many fights, adding his seventh KO; and in amateur Cato worked to score more than Azzedine. Tetef added his third victory in a style exercise, while in professional K1 the rookie Mikel Sánchez defeated Formoso and Chiaburu and Guzmán offered the battle of the night

Natxo Mendoza’s last dance was the one he dreamed of: at home, with his family, colleagues and friends filling the stands and his brothers accompanying him in the ring. Before the beginning of the professional program of the evening held yesterday at the Iradier Arena, the presenter, Daniel Montero, called Mendoza. On the canvas and under the spotlights Natxo received the presents and the warmth of the Vitorian boxing fans. The children of the Gasteiz Boxing Club climbed the stage with the good rosary of belts harvested by the San Antero in almost 20 years of career between featherweight and welterweight. Mendoza thanked excitedly.

He won his six-round fight against a prudent Hermin Isava, more concerned with avoiding exchanges and trying not to anger a rival for whom he showed admiration. Mendoza controlled the confrontation not without receiving some against and enjoyed every second of his last dance from bell to bell.

Before, his brother Fran dispatched the Hungarian Joszef Ajtai and little more than a minute. “We had studied him in videos and we knew that he moved a lot. We worked a feint with the forward foot combined with a crochet at mid-height. I have caught him so well that I have hurt my hand,” explained a satisfied Fran, which has 12 victories in as many fights, with seven KOs. The little Mendoza is ready for important appointments.

The stylist Tetef took two rounds to decipher the movements of an expert and always complicated Dionís Martínez. The Venezuelan crossbows perfectly, moves easily in the ring and handles straight hands and uppercuts with ease. The young Moroccan resident of Salinas de Añana unwound his opponent’s ball in the last two rounds through combinations and side steps and ended up harassing a good Martinez. Clear victory. The third in three fights for a Tetef who climbs a notch.

The battle of the night was offered by the local Flavius ​​’Gladiator’ Chiaburu and Eduard ‘El Gallo’ Guzmán in professional K1. They went out to give no truce and ended up kneeling one in front of the other showing an emotional respect for each other. In the first round, Guzmán hunted Elite Sport with a right wing. Chiaburu needed to rush the protection account. And he refused to hold on to gain time. Both fighters offered the public all the panoply of resources that the K1 offers: spins, jumps, rotational kicks … Guzmán also needed a protection account. In the end, victory to the points for the Romanian and Alava adopted ‘Gladiator’.

The first of professional K1, the debut of jugrero Mikel Sánchez, was resolved much earlier. The young man from Haro did not accuse his nerves and dealt with the Ferrol Adrián Formoso face to face. Already in the first round, the Galician kicked one of his legs. The sum of punishment caused the abandonment of Formoso and the overflowing joy of a Sánchez who climbed to the ensogado to shout victory.

In the amateur show, Leire Remacha beat Nekane Alda in the K1 clash of Vitoria. Already in amateur boxing. Cato Mendoza beat the difficult Burgos Azzedine, from the Saltando Charcos club, on points. Also from the Gamonal neighborhood of the Castilian capital came Saber Mahouti who beat the local, current champion of Euskadi, Iván Vigo. the Biscayan Hodei Allende and Uzuri Arebalo beat Ane Barrantes and Dorleta Zubeldia from Alava.

Good atmosphere and good public entrance in the magnificent stage of the Iradier Arena in Vitoria-Gasteiz from where the evening was televised. After the last dance Natxo Mendoza, his wife and children will fly to Colombia to spend three weeks on the beaches where the champion of San Antero was born and visit relatives. In the background of the boxer’s life will always be his father, who was also a boxer.

The South Californian Emiliano Reducindo is two-time champion of the Olympic Boxing festival
‘Laguna: our boxing idol’
La Jornada – It was a privilege to face Pacquiao: Marco Barrera
BOXING 905