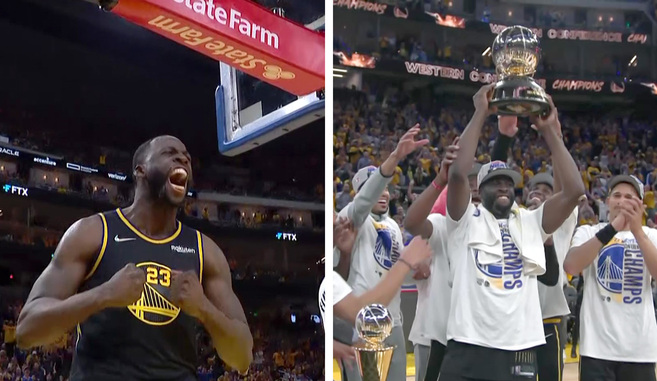 Lyou Golden State Warriors they won 120-110 to the Dallas Mavericks for win the Western Finals 4-1 and close your qualification for the NBA Finals three years later.

Stephen Curry, Klay Thompson and Draymond Green will play in their sixth NBA Finals in the last eight years and the Warriors become the first franchise since Michael Jordan’s Chicago Bulls to reach six NBA Finals in eight years.

The Warriors will face the winner of the Eastern Conference final for the title, who dominate the Boston Celtics 3-2 against the Miami Heat.

Luka Doncić He attempted the miracle with a fantastic third-quarter finish, trailing by 24 points and leading the Mavericks on a 15-0 run in just three minutes that put Dallas just behind.

But the Warriors put down Doncic’s rebellion with a solid fourth-quarter start that held up in the unexpected figure of Kevin Looneywho dominated in both zones with 10 points and 18 rebounds.

Stephen Curry He did not have his best night facing the rim, but his unusual low contribution in scoring was compensated by the offensive success of Klay Thompson and the rest of his teammates, who in a very successful second quarter put the game very face for Golden State.

Curry (15 points on 5-for-17 shooting from the field), Klay Thompson (32 points on 8-for-16 3-point shooting), Andrew Wiggins (18 points and 10 rebounds) and Draymond Green (17 points, 6 rebounds and 9 assists) were the best players of some Warriors who had the surprise factor of Kevin Looney’s great game in the paint.

Golden State’s 51 rebounds, 14 of them offensive, against Dallas’ 34 were decisive in the game.

Doncic woke up late and only Dinwiddie helped him in his attempted assault on the Warriors.

Doncic, who woke up in a sensational third quarter end, recorded 28 points, 9 rebounds and 6 assists and closed the NBA Playoffs with averages of 31.7 points, 9.8 rebounds and 6.4 assists.

Spencer Dinwiddie was the former Real Madrid’s best partner, and coming off the bench he added 26 points with 7 triples.

Dorian Finney-Smith (13 points) and Jalen Brunson (10) were the other players to post double figures as the Mavericks lost their rebounding battle against the Warriors.

Loading...
Newer Post
The remarkable alliance between Bayern Munich and Misiones: football did it
Older Post
Estrada, the young man with Nicaraguan roots who will be in the international youth boxing tournament |