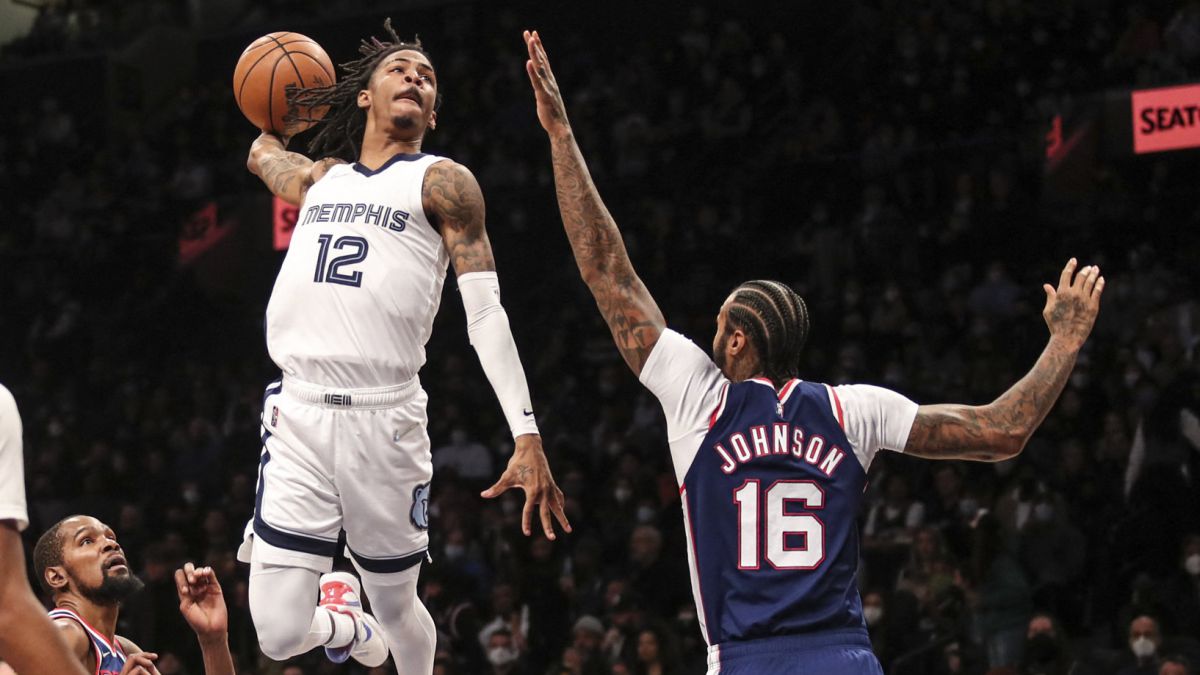 BROOKLYN NETS 104 - MEMPHIS GRIZZLIES 118 Third loss in a row for the Nets, who do not raise their heads these days and the bad vibes are passing

Third loss in a row for the Nets, who do not raise their heads these days and the bad vibes are passing between them. Durant and Harden were the team’s top scorers but amassed a poor 13/38 on field goals. One of the shots from the point guard was blocked by Santi Aldama in a surprising way, with the Spaniard having 17 minutes to play. Morant (36) and Bane (29) formed an unstoppable couple.

Curry’s bad game (3/17) was joined by other more positive points and the injury to the rival side of Jimmy Butler when he had 22 points. Jordan Poole, with 32 points, was the best of the meeting between these two colossi, one in each conference, which leaves the Warriors as leader of the League one more day.

Incredible points duel at the Moda Center. Anfernee Simons, the day after losing his grandfather, reached his best mark with 43 points that he endorsed the Hawks. On the other side the Hawks, also hit by casualties although not on the level of Lillard and McCollum, had a historic event: Trae Young had 56 points and 14 assists and his team did not win, paired in history with Archibald in this dismal statistic. .

Valanciunas and Ingram returned, but not with victory under their arms. Mitchell, Conley and Bogdanovic were too much for the Pelicans. The Jazz have only lost to the Warriors in the last seven games.

DeRozan (29) was the best of the Bulls in another victory, but was on the verge of throwing it away. He had just won two games with two triples and was close to trying another flavor. The hosts came in at the last minute with a small five-point lead, but a free-throw carousel in which DeMar missed two of them opened a small door.

Kuzma (36) completed a great game against the Hornets. In reality, the last minute was not so competitive, but two triples by Rozier in ten seconds made up the disadvantage of Borrego’s, who added two consecutive defeats. The defense was once again a headache for Charlotte, who took forty against in the fourth quarter.

Joel Embiid posted a triple-double (31 + 15 + 10) to put the 76ers ahead in a single game against the headless Rockets. For Philly it is the fourth in a row and with it they reach twenty on the global.

Edwards (28) led the Wolves in their assault on the former Staples Center. A poor second quarter for the Clippers, who continue to suffer without Leonard and George, tipped the balance and the visitors had it easier for the rest of the evening. The Angelenos have won only three of the last ten games.

Painful defeat for the Bucks despite having Giannis and Jrue at a high level. Saddiq Bey continues his hot streak against the champions. Read the chronicle.

Second appointment in a row. Second victory achieved. Doncic’s return elevates the Mavericks and involves teammates in need of a boost. Read the chronicle.

Loading...
Newer Post
How much gasoline is left: Fernando Alonso surprised and set a date for his retirement from Formula 1
Older Post
Negritas is crowned as the great champion of soccer from Dolo