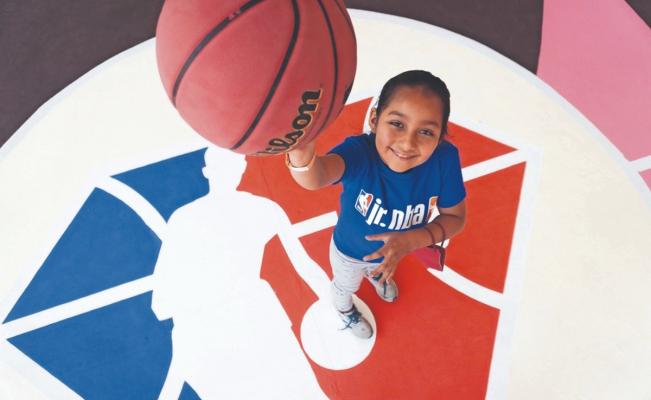 Ixtlán de Juárez.— At a fast pace, Sofía Miranda takes a place in line to participate in the activities that the United States National Basketba

Ixtlán de Juárez.— At a fast pace, Sofía Miranda takes a place in line to participate in the activities that the United States National Basketball Association (NBA, for its acronym in English) leads in Ixtlan de JuarezSierra Norte, as part of the celebration for his 75th anniversary.

Sofía Miranda Añorve wears a blue shirt with the legend “Jr NBA” and the badge of the association that promotes the so-called burst sport, which emerged in the American Union.

Although she bounces the ball with ease and naturalness, Sofía, who is eight years old and is in the second grade of primary school at the town’s municipal school, confesses that until a year ago the basketball it was not one of his passions; however, his brother Jaime, 14, and his mother are fans of this sport, so they ceremoniously watch the games every night in their living room.

It was a year ago when the little girl attended a training session at the basketball court in Ixtlán for the first time, with the intention of learning about the sport that unites her family.

For 46 years, on the court where Sofía trains, the Benito Juarez Cupwhich brings together more than 200 basketball teams from the Zapotec peoples, mixes and chinantecos who practice this sport on a daily basis.

This April 29, with the presence of Chris Staplesa professional dunker (one capable of scoring the ball with one or two hands), the Ixtlán de Juárez municipal court was reopened, which was remodeled at the initiative of the NBA.

Was the artist Julio Silvaoriginally from the Mexico Citywho was in charge of the work that, from now on, “dresses” the court with drawings of endemic flowers and skulls, figures chosen by the artist in allusion to the traditional altars that are placed on Day of the Dead. 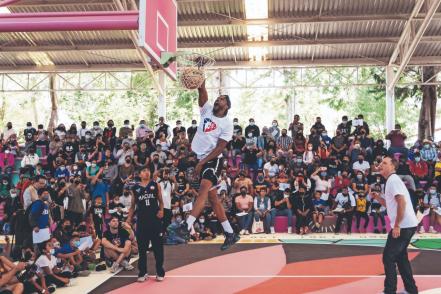 The acrylic paint that covers the surface of the court where hundreds of games will be played inspires girls and boys like Sofía to learn the discipline of basketball, but also to have fun practicing it.

The field in Oaxacan territory is the second intervened by the NBA. The first is located in the ejido The Peace of TorreonCoahuila, and was inaugurated on March 13.

Read more: Interoceanic Corridor will start in a city of Oaxaca with more than 50 neighborhoods without drinking water

In addition, the American league will also remodel other courts in San Luis Potosi and in the Mexico City.

In the chosen sites, the practice of basketball stands out, especially in generations that are in training.

The tradition of training girls and boys from the Sierra Juárez in basketball, in this municipality that is located almost 70 kilometers north of the Oaxacan capital and has a population of just over 8,000 inhabitants, has been transmitted by generations, admits the mother of little Sofía, Yaneli Añorve, who practiced this sport for nine years.

Yaneli is originally from Tuxtepec, in the Papaloapan Basin; however, she settled for more than 16 years in Ixtlán, where she started a family with her husband and four children. Sofía is her second daughter and for her mother it represents a pride for her to see her practice. 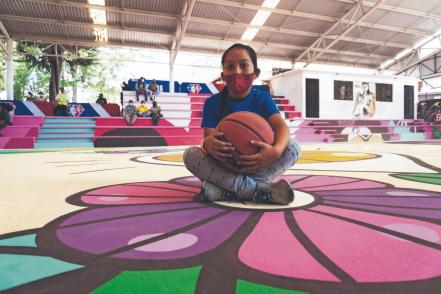 “At first I didn’t like it at all, but now I want to be a professional player,” says little Sofia.

Little by little, he says, he has been perfecting his basketball skills and, over time, he has also learned to love his community’s favorite sport.

She says that it afflicts her that few girls practice basketball. “Sometimes it makes me a little sad that there are only a few girls who play, when I started training there were four of us and now there are only two of us,” she laments.

the pandemic for Covid-19 has affected the pace of sports practices in the community, because due to the risk of contagion, many girls and boys stopped attending training sessions on the municipal field.

Of the age of Sofía Miranda Añorve, in the community there were 20 girls and boys practicing every afternoon, now only 10 attend.

For the girl, the lack of assistance from minors like her does not mean an impediment to practicing her shots and rebounds with great effort.

read also: They break the traditional education model to cultivate interest in science in 132 children from Ixtepec, Oaxaca

He emphasizes that although he would also like to study the medical careerdoes not rule out preparing later as a professional player.

Tags: 75th anniversary of the NBA, oaxacan basketball, Ixtlan de Juarez
The tremendous dunks of Hansel Enmanuel, the one-armed young man who dreams of the NBA
From Bizarrap in NBA 2K22 to Paga Dios in CA7RIEL and Paco Amoroso | The #Hashtags of NO | New music and the best to watch, read, play, try and learn
The Boston Celtics beat the Milwaukee Bucks and will play in the NBA Finals
NBA 2835