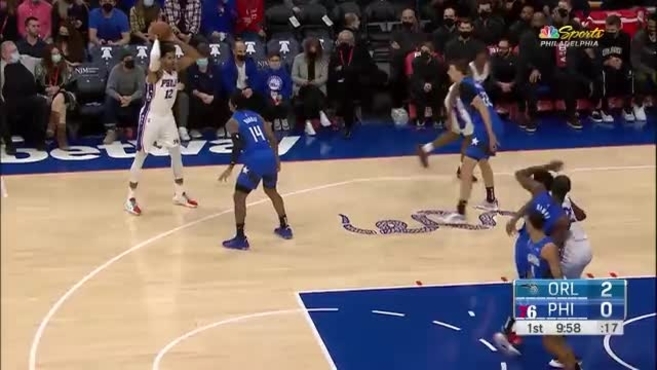 Joel Embid He already brushed the MVP last season. So, only his physique and his continual injuries prevented her from reaching the throne that he

Joel Embid He already brushed the MVP last season. So, only his physique and his continual injuries prevented her from reaching the throne that he would finally sit on. Nikola Jockic, leaving a thorn in the pvot cameruns. And there is nothing worse than a wounded beast to stimulate your wildest instinct.

The African center is determined to leave behind the label of a ‘fragile’ player and after a hesitant start to the season he has completely changed the perception and now few players exhibit their physical dominance in both zones with the regularity with which a Embiid who already has 16 consecutive games without rest. A streak that has not been seen since the 2018-2019 season.

This new Embiid version, stronger and more consistent, has allowed the 76ers to overcome the loss of Ben Simmons and stay in the elite of the East and has also kept the African pvot in the race for an MVP (fourth behind Antetokounmpo, Jokic and Durant) which has become an obsession for him.

And to achieve it, nothing better than numbers (28.9 points per game with 49% shooting from the field) and exhibitions like the one he starred in his last game against the Orlando Magic. A duel that he handled at will and in which he ended up with 50 points, equaling the best record of his career… in just 27 minutes.

Embiid equals his best scoring mark with a 74% success in field goals and accompanied his statistics with 12 rebounds. Numbers not seen in Philadelphia since Wilt Chamberlin whom Embiid equals as the only players in Sixers history with games above 50 points and 10 rebounds. In addition to his express exhibition, Embiid enters the All-time top 10 players with the most points per minute in an NBA game. More than enough reasons and numerical reasons to think that this wounded beast can finally have its trophy at home.

Of course, for that Maurice Podoloff trophy to reach Embiid’s windows, the Cameroonian will need more recitals like the one he gave against the Magic. It is the only way to face another crack as he is the current MVP of the competition. Nikola Jockic responded to the onslaught of the 76ers center with another performance to remember with a new triple-double. The Serbian pvot had to take out his best weapons to knock down the Clippers in overtime and ended up with 49 points, 14 rebounds and 10 assists in 41 minutesbeing the third pvot who has scored the most points to get a triple-double after Wilt Chamberlain and Kareem Abdul-Jabbar. Who said that basketball was now a thing for little boys?

It is not being the easiest season for the Atlanta Hawks. When many saw a candidate team after their playoffs last season, irregularity has taken over a team that still has left Bring Young. The average point guard 30 points and 10 assists in his last 31 games and in his last game he went to the 37+14 to take down the Timberwolves.

While Juancho Hernangmez He is already waiting for his opportunity as a player of the San Antonio Spurs after its official presentation, Santi Aldama and Serge Ibaka They are still the best representatives of national basketball this course in the NBA. The Canary continues to win minutes in the rotation of the Memphis Grizzlies (126-114 loss to the Milwaukee Bucks) and in his last match he came off the bench to finish with six points (three of seven shooting from the field) and capture three rebounds in 13 minutes. For his part, the Congolese player with a Spanish passport started for the Clippers to finish with seven points, six rebounds and three assists in 14 minutes.

What a pity that we can’t enjoy Kyrie Irving in every game of the season! Because the part-time point guard is still better than most full-time NBA players. In the absence of Kevin Durantthe point guard assumed the stripes of command and knocked down the Wizards with 30 points and seven assistsmaking us even more regret his absences due to the issue of vaccination.

The Miami Heat have hunted down the chicago bulls at the top of the Eastern Conference after his victory (104-92) against the Portland Trail Blazers. A victory that was at risk after the Florida team was left without its great star, Jimmy Butlerwho showed his worst version with the referees to whom he did not stop protesting for a foul, which earned him a double technique that sent him to the locker room ahead of time.

LaMelo Ball has only been in the NBA for two seasons, but he is already the history of the Charlotte Hornets. The reigning Rookie of the Year ended the Celtics’ resistance with another triple-double (Thanks, Miles Bridges) after adding 15 points, 10 rebounds and 10 assists. It’s his third triple-double of the season and ties Anthony Mason for the most triple-doubles on the Hornets in a single season.

The Utah Jazz do not lift their heads and added a new defeat against one of the worst teams of the season in the NBA. Some Houston Rockets who have become accustomed to living off the genius of Kevin Porter, who was once again decisive with a triple against Mike Conley with 30 seconds remaining that put the finishing touch to the Salt Lake City team.

Tags: philadelphia 76ers, basketball nba
NBA: LeBron James and the Lakers, the ones that sell the most jerseys in the NBA
NBA: Vaccine guard Kyrie Irving could play games in Brooklyn if Nets pay derisory fines
NBA: The player who only wanted tickets to a game and ended up winning a ring with Jordan
NBA 2557