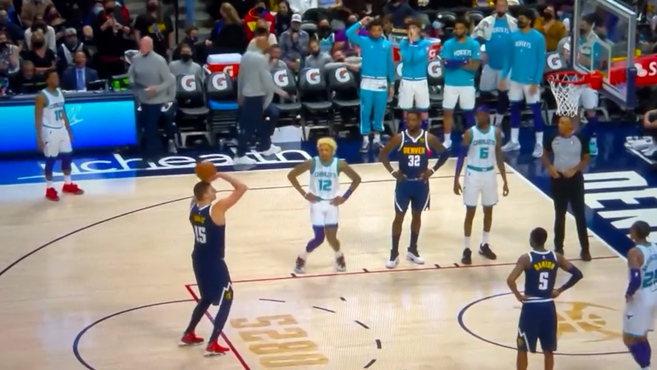 Hoh players who, to try to distract the shooter on a free throwThey resort to all kinds of little noises, such as a louder than normal sniffing, an

Hoh players who, to try to distract the shooter on a free throwThey resort to all kinds of little noises, such as a louder than normal sniffing, an unwelcome cough, a click of the tongue, or they play it with a slap or a scream that is usually punished with a technique if the referee hears them. Also the defender closest to the shooter tries to gain space for the rebound by moving his arms, which is really yet another diversionary maneuver. And then there is the defense of Kelly Oubre Jr.

The huge battle that was the Hornets – Nuggets Charlotte’s 115-107 win left room for one of the most hilarious sequences of the season to go straight to the Shaqtin-a-Fool, Shaq’s weekly compilation of quirks, oddities, and glitches of NBA plays.

On a free kick of Nikola Jokic, Oubre makes a movement between the spasm, dance and a fit of lazy legs to try to distract the Serbian who, fully concentrated, achieves the goal of transforming his shot into a point. The maneuver, never seen in modern basketball, did not work, but it may become fashionable in the NBA in the coming games and we will see more original movements of this type on free throws. The NBA is already taking a long time to organize a contest …

Tags: basketball nba, Denver nuggets, Charlotte hornets
NBA: Pushing and smacking! The unloving gifts of Reyes de Nurkic and Herro in the fight of the night in the NBA
Cavaliers 115-120 Suns: A failed Ricky Rubio suffers the most heated team in the NBA
NBA: The tremendous data that makes the Bucks the best ‘Big Three’ in the NBA
NBA 1298