NBA PlayOffs 2022: Ja Morant jumps over an opponent in an anti-gravity dunk for history: How much does the new NBA star jump? 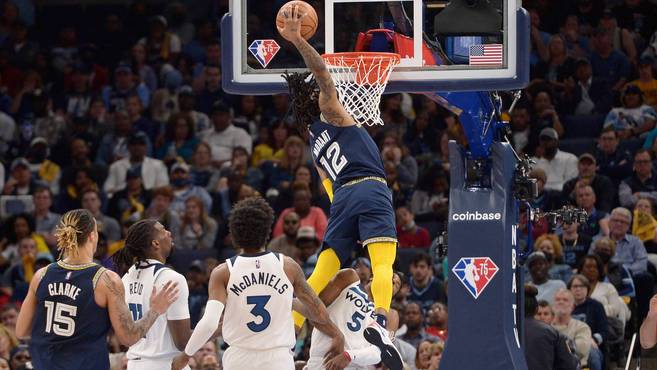 NBA PlayOffs 2022: Ja Morant jumps over an opponent in an anti-gravity dunk for history: How much does the new NBA star jump?

Anthony Edwards intoned the ‘mea culpa’ on Morant’s winning basket, when he made a mistake when trying to steal the ball from him and allow his penetration to the basket: “It was a stupid mistake”.

Morant, who finished the match with 30 points (18 in the fourth quarter), 13 rebounds and 9 assistsshowed again that he has springs in his legs like few have seen in the NBA in recent years.

At the end of the third quarter Ja Morant starred in a mate that is going around the world and that instantly became viral on social networks.

The Grizzlies star was suspended in the air to jump over Malik Beasley, who suffered one of the biggest ‘posterizations’ in memory, to crush the Timberwolves rim.

How much does Ja Morant jump? His incredible vertical jump seems antigravity

Tags: Memphis Grizzlies, NBA playoffs, Ja morant
PlayOffs NBA 2022: The Celtics return to the NBA Finals in a maddening final in which they almost doomed against the Heat
NBA PlayOffs 2022: Who are you and what have you done with the Kevin Durant we all know?
NBA Finals 2022: A double by Klay Thompson sneaks into the NBA final
NBA 3181