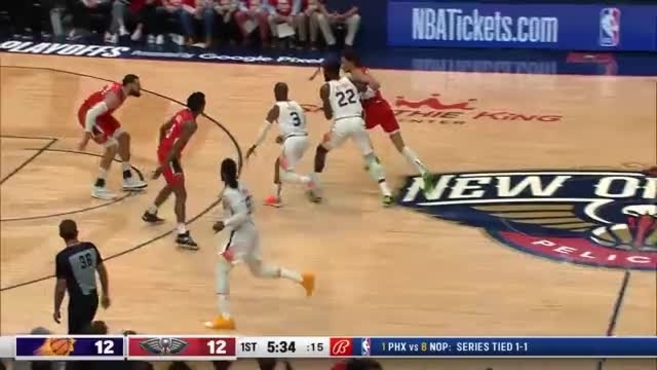 Chen talking about the best point guards in NBA history, the same names always come to mind for most: Bob Cousy, Oscar Robertson, Magic Johnson, Is

Chen talking about the best point guards in NBA history, the same names always come to mind for most: Bob Cousy, Oscar Robertson, Magic Johnson, Isiah Thomas, John Stockton… A list of legends that until recently did not include Chris-Paulwhose career was questioned due to the lack of rings or individual awards that would give him a category that he had reached for his game a long time ago.

After putting the Phoenix Suns in the Finals last season ‘Point God’ ended any discussion about his legacy on the pitch. But Paul wants more and is not satisfied with having legitimized his candidacy to be among the best in history. The point guard knows that he has an unfinished task and he wants the jewel that last year slipped out of his hands And he’s not willing to allow shocks like the one the Pelicans intended to give him in Game 3 of their first-round playoff.

The point guard once again demonstrated that decisive moments are made for him and with a recital to remember, he sealed the second victory of the series for the Arizona team. CP3 signed a last quarter to remember with participation in 23 of the 33 points scored by the Suns in the last quarter. The base he scored 18 points and distributed two assists that ended up suffocating any attempt at rebellion by the Pelicans.

The 36-year-old gave a new lesson in how to manage a team and he finished the game with 14 assists and no turnovers ball. It’s his seventh playoff game with 10-plus passes and no turnovers, one more game than Magic Johnson, Isiah Thomas, John Stockton, Steve Nash and Jason Kidd… combined! A fact that speaks for itself of the greatness of a player who in the last two games has added 28 assists, a figure never seen before in two consecutive playoff games.

“He is one of those players who always plays in the most appropriate way,” says Monty Williams about a Chris Paul who has left past labels behind and who only has one goal in mind. “He understands how and when to create play for himself and his teammates. He’s a leader and what you don’t see in time-outs is almost as impressive as what you see on the pitch.”

Despite not having the support of Devin Booker, who will also miss the fourth game of the series, Chris Paul did have by his side DeAndre Ayton. The Bahamas center continues to grow in his game and against the Pelicans he finished with 28 points and 17 reboundsbeing the first Suns player to reach those records since Amar’e Stoudemire.

The Chicago Bulls signed the worst night in their history in the playoffs with biggest postseason loss (81-111) against some Bucks who took advantage of the bad offensive day of the Illinois. The Bulls ended the night with a 39% shooting from the field and barely 26% from 3-point range with just nine shots from three scored in 34 attempts.

The Miami Heat They were about to make it 3-0 in their tie with the Hawks if it weren’t for the cold blood of Bring Young in the final moments of the crash. The base left in nothing the good game of Tyler Herro -one more- that ended with 24 points off the benchwhich is useful for beat ray allen as the backup player with the most playoff games topping 20 points in Florida franchise history.

The Spanish Serge Ibaka, who had lost prominence in recent weeks, scored five points and collected six rebounds in eight minutes on the court, after going out to compete in the last period with the match between the Bulls and Bucks already decided. For his part, Willy Hernangómez again ran out of minutes in the third game of the series between the Pelicans and the Suns.

They couldn’t stop Chris Paul in the final quarter, but CJ McCollum and Brandon Ingram did everything in their power and a little more to try to keep the win from New Orleans. The shooting guard went up to 30 points with 11 of 23 field goals and seven assists, while Ingram had 34 points with 11 of 19 and seven rebounds in his private locker.

Tags: basketball / nba / playoffs, NBA playoffs, Phoenix suns
NBA Finals 2022: The anticipated final of the Finals that they did not expect in the Bay
NBA PlayOffs 2022: Antetokounmpo doing what he wants with the Celtics’ defense, how barbaric!
PlayOffs NBA 2022: ‘War of the Gods’ in the seventh game: Giannis against Boston and Doncic’s impossible
NBA 3181

Loading...
Newer Post
PlayOffs NBA 2022: Trae Young does not give up: he brings the Hawks to life when the Heat were already singing 3-0
Older Post
Sprint races: this is how they will take place in the 2022 Formula 1 season