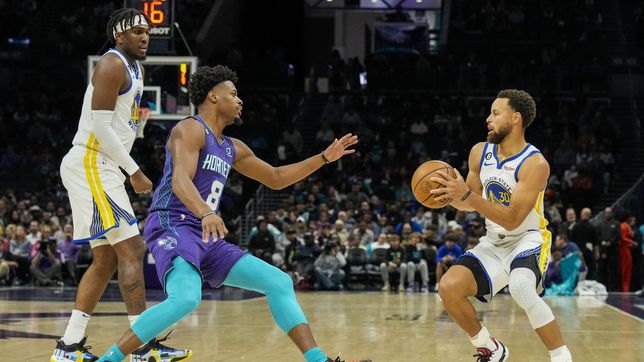 HORNETS 120 - WARRIORS 113 Charlotte smiled again as she faced Curry's Warriors, who grew up there when her father, Dell, played. She needed an ex

Charlotte smiled again as she faced Curry’s Warriors, who grew up there when her father, Dell, played. She needed an extension. And the Warriors had entered the last minute of the fourth quarter with a lead of four, but two baskets by Washington (31) and Smith (13) forced an overtime in which the champion could not escape. It is the third loss in just six games for them. The performance of Stephen Curry (31) and Jordan Poole (24) was not enough to stay alive.

The undefeated Bucks continue their journey with a win at home against another of the East’s dynamic teams, Atlanta. The duo formed by Giannis (34+17) and Jrue (34+12) was more than an extraordinary Trae Young (42 points) and points to the fifth in the Milwaukee locker, which continues to make good predictions that they give him as the next champion .

Utah was a gale in the end of its game against Memphis and took another surprising victory. Ja Morant was not part of the game in the box led by Taylor Jenkins and it showed. The Grizz were up fourth going into the final two minutes, but a pair of 3-pointers broke down the resistance. Olynyk (23) and Beasley (12) disrupted the visitors, who then scored through Brooks (30) and even had the last one, in which Bane (32) couldn’t even shoot. It’s the fifth for the Jazz, who pay no attention to their rebuild and continue to look up.

The 76ers catch their breath with two straight wins after a shaky start. The last one, at the Bulls’ house. A triple by Embiid (25) with eighteen seconds to go, a miss by DeRozan (24) and two free throws by Harris (13) made the difference with which the night ended.

Sacramento opens this season with a victory against Miami that supports the work they are doing with the changes made in the summer. Huerter (27) and Murray (22), two new players on the team, were the best along with Sabonis (18), who missed just one shot and is also in a new role as leader of this team. Herro (34) was not enough to come back, neither his good run in the last quarter nor the contribution of his teammate Butler. The Heat have already played seven games and have only won two of them, the alarms are also going off there.

Doncic was not up to the task and Dallas lost a game that they had almost won. And against one of the rivals of the West that already has fewer options. Read the chronicle.

Fifth loss in six games for the Nets. And at home. The players make pineapple between Steve Nash’s anger and Kyrie Irving’s controversy. Read the chronicle.