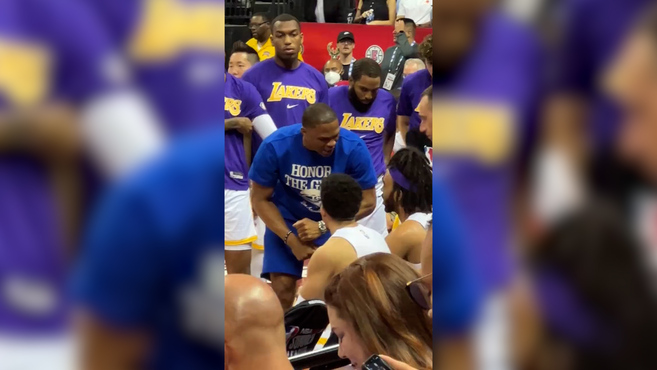 The NBA Summer League unites stars of the future with players of today's top world level. They visit their new teammates, they teach them some key

The NBA Summer League unites stars of the future with players of today’s top world level. They visit their new teammates, they teach them some key notions and, more importantly, they are a key support in their first foray into the best basketball league in the world.

Russell Westbrook proved it by being very involved in the Lakers game in the Summer League. He not only went down to the foot of the track, but he got among the players and gave them a speech full of emphasis. Given its current situation, it also served as the focus of all kinds of assessments by fans: criticism, compliments…

Westbrook exercised his player option that joins him for one more season with the Los Angeles franchise. That does not prevent him from being in numerous Lakers accounts to be able to free himself from his salary and be able to bet on another point guard. Like the Nets, although the Brooklyn franchise is currently focused on Kevin Durant and his request to leave.

For now, it seems that Westbrook would be happy to stay with the California team. Although his colleagues are not very for the work… Like LeBron James, who was also present at the Summer League but decided to sit far from his starting point guard.