NBA: Santi Aldama graduates with honors in defense: endures James Harden’s lethal ‘step back’ and ends with a block 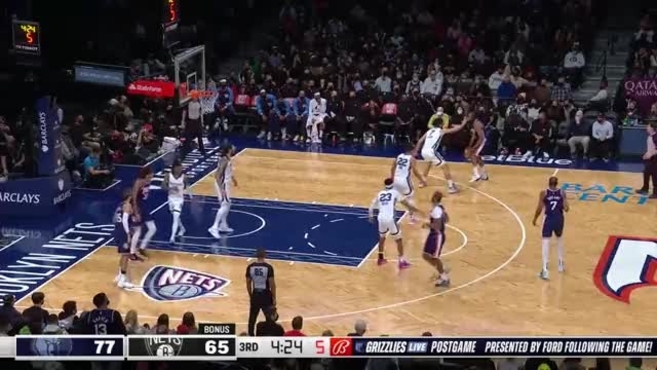 Lyou Memphis Grizzlies They have stopped being a surprise to establish themselves as one of the best teams of the NBA season. And in case they lac

Lyou Memphis Grizzlies They have stopped being a surprise to establish themselves as one of the best teams of the NBA season. And in case they lacked something to win that category, they have shown it by storming one of the most complicated places in the NBA, such as the Brooklyn nets, those who dominated by 104-118.

A match in which Ja morant showed that he can already be considered a contender for the throne of the best point guard in the league with an outstanding performance: 36 points, 6 assists and 8 rebounds and the feeling of superiority at all times before a Nets without arguments.

The Grizzlies also had Desmond Bane (29 points, 8 rebounds and 2 assists) to surprise the Brooklyn team, far inferior on the rebound (33 vs. 61 for the Grizzlies) and wrong in the shotKevin Durant achieved 26 points with 8 of 24 and James harden got 19 points with 5 of 14).

The Spanish Santi Aldama had a notable weight in the rotation of the Memphis with 17 minutes in which he achieved 2 points, 8 rebounds and a block that has demonstrated the ability of the Canarian player for defense, enduring Harden&#8217;s lethal &#8216;step back&#8217; until the end .

Tags: Brooklyn nets, Santi Aldama, Kevin Durant
NBA: Barkley’s tough message to Zion Williamson for her feeding: “It seemed like Shaq and I had a baby.”
NBA rumors: Minnesota Timberwolves, practically out of the fight for Ben Simmons
NBA: Michael Jordan wants to be Jon Rahm: “I would love to have his game”
NBA 1367