NBA: Santi Aldama signs his first great game in the NBA: 16 + 9 to present himself to his fans 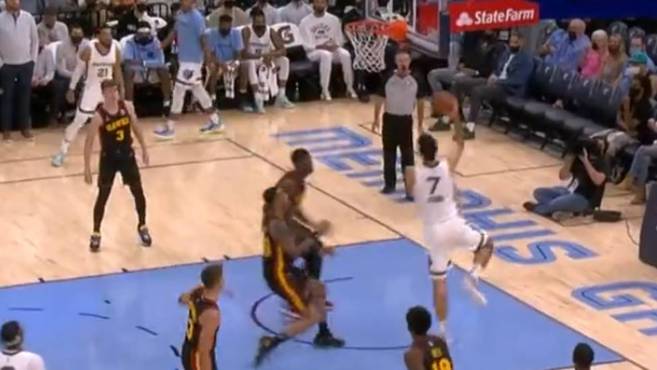 Santi Aldama follows his natural process of adapting to the NBA and the demands of his coach and little by little he slips into the rotation of the Memphis Grizzlies. After playing just seven minutes in the previous match against the Hornets, the Canarian power forward took advantage of his greater role on the court in the third preseason game of the Tennessee team that ended in defeat against the Atlanta Hawks 87-91.

Kill of Santi Aldama against John Collins and Gorgui Dieng

The Grizzlies coach gave rest to some of the team’s biggest players like Ja Morant or Steven Adams and distributed minutes among the youngest, highlighting the contribution of the Spanish player, who after going blank in his first appearance in an NBA game closed their second meeting touching the double-double.

Aldama I came back from the bench to play 27 minutes (the second most used player by Taylor Jenkins) and scoring 16 points (seven of 14 from the field, including one of five from the triple), grabbing nine rebounds and distributing an assist. Good numbers culminated with actions such as the mate against John Collins and Gorgui Dieng or his connection with the other rookie of the Zaire Williams team.

Along with the Spanish player, the escort shone Desmond bane, who was the Grizzlies’ leading scorer with 18 points, while Brandon clarke He finished with 16 points and six rebounds to complete the trio of Memphis players who surpassed 10 points.

Numbers that were insufficient against some Hawks in which Trae Young was not, but that did have the veteran that the Grizzlies lacked thanks to figures like John Collins (16 points and 12 rebounds) and the serbian Bogdan Bogdanovic, who finished with 16 points and four triples.

Tags: Atlanta Hawks, basketball nba, Santi Aldama
PlayOffs NBA 2022: Trae Young does not give up: he brings the Hawks to life when the Heat were already singing 3-0
NBA: Luka Doncic continues to make history in the NBA: triple-double ‘exprs’ to beat Magic Johnson and Oscar Robertson
NBA PlayOffs 2022: The inside story of Ja Morant’s viral mate and the biggest trigger the NBA Playoffs have seen in 25 years
NBA 2507