NBA: Santi Aldama’s +52 leaves him at the gates of history: “It was an incredible game” 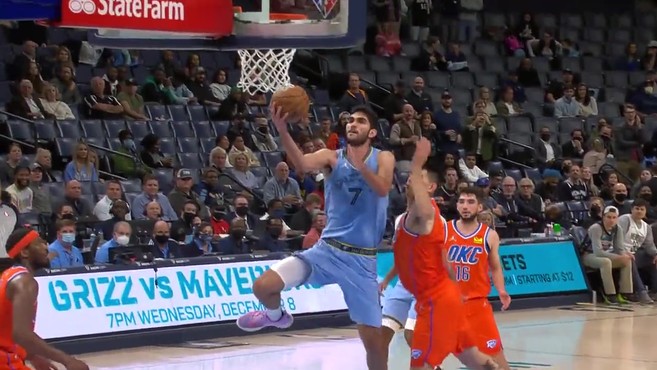 Updated 12/03/2021 - 08:56 ANDl spanish Santi Aldama was the protagonist in the historic night of the Memphis Grizzlies, which beat the record fo

ANDl spanish Santi Aldama was the protagonist in the historic night of the Memphis Grizzlies, which beat the record for the largest point difference (73) in an NBA game, and after the match he stressed that it was something absolutely special but he urged his team to keep their feet on the ground. “It was an incredible match, of course. We have all played very well and it has been a lot of fun to play, but at the same time we have another match in two days,” he recalled. “It’s great to feel good now but we have to go back to work tomorrow,” he added.

The Memphis Grizzlies beat the Oklahoma city thunder by 73 points (152-79), a gigantic and historical difference in the score that supposes a new record in the NBA. So far, the largest margin in an NBA game has been in a game on December 17, 1991, in which the Cleveland Cavaliers they smashed the Miami Heat by 68 points (148-80).

Aldama joined this party for Grizzlies history with his best performance since landing in the NBA. The Spanish rookie was the third highest scorer on his team and played 28 minutes in which he got a double-double (the first of his NBA career) with 18 points (8 of 16 shooting), 10 rebounds, 3 assists, a robbery and a plug.

Aldama also keeps a personal record: that of the best rating +/- (plus / minus statistic) for a Grizzlies player in the entire career of the franchise. The Spaniard got a +52 In this statistical section that measures the individual contribution of a player in a match taking as a reference the score when he enters the court and comparing it with when he goes to the bench.

This data also places Aldama with the third best over / under in a game in NBA history only behind Luc Mbah a Moute, which achieved a +57 with Houston Rockets in 2017; and of Gary Trent Jr., who got a +54 with the Toronto raptors last April.

In the collective aspect, the Grizzlies beat their best historical scoring mark in a game, had nine players above 10 points, made 62.5% of their shots, at halftime they already won 72-36 and reached win by 78 points in the fourth quarter.

Apart from having participated in a game to remember, Aldama takes the satisfaction of being increasingly consolidated in the rotation of the Grizzlies after the franchise temporarily assigned him to the Grizzlies. Memphis hustle development league G-League.

The young man pointed out that his mentality is to “be prepared” whatever happens for when it is his turn to play. “When I enter the court, I just give it my all to try to make the team win,” he explained. He also indicated that his first weeks in the NBA are being “a learning experience” and he hoped to feel more comfortable on the court as he accumulated more minutes of play.