NBA: Stephen Curry and his most incredible shooting display Is it an alien? 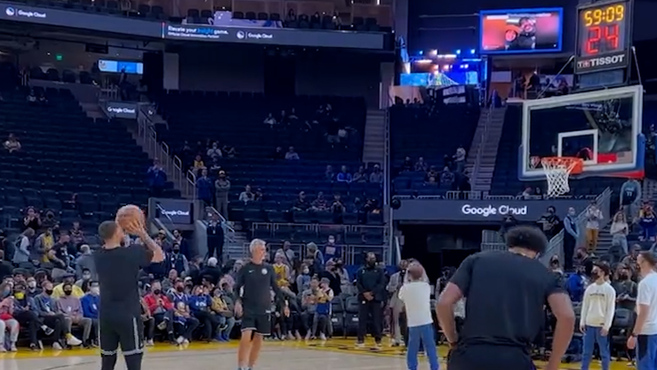 QEU Stephen Curry he's one of the best shooters in NBA history no one can argue with. One day and another too shows to have a prodigious grimace s

QEU Stephen Curry he’s one of the best shooters in NBA history no one can argue with. One day and another too shows to have a prodigious grimace scoring very distant shots, almost from the center of the field, as if nothing had happened. Circulate through social networks one of his shooting exhibitions during a warm-up that endorses him as the best ever.

It happened before a match on the field of the Warriors. Curry, assisted by a ball boy, started scoring from the free throw, then took a step back on each free throw. until throwing from the midfield logo. And continued his series approaching again to end where he had started, closing his incredible exhibition with 16 baskets without failure. the icing was a bomb launched into the sky… yes, I came in clean too.

In the 13 seasons that the Warriors star has been in the NBA has dazzled with his triples. He has scored 3,117 in his 7,290 attempts (only accounting for the regular League), an average of 3.7 per match with 42.7% efficiencya fantastic average.

He snatched the triple podium from Ray Allen

Not in vain, this season they were crowned as the Greatest 3-point shooter in NBA historysurpassing the mythical Ray Allenwhich had added 2,973 throughout his career. And he holds the record for most triples in a season, with 402 in 79 games in 2015-2016in which he credited an incredible 45.4%. Besides, he has enough rope for a while. There is no glimpse for now of anyone who is capable of surpassing their triplist records at least in the next few years.

Tags: Stephen Curry, basketball nba, Golden state warriors
NBA: Doncic enters the COVID-19 protocols and does not play on Christmas day
NBA: Surrealism in its purest form in the NBA: the two teams take to the field with the same kit
NBA All Star 2022: Jalen Green and the most blushing mate: eight mistakes and five minutes that caused this face of Shaquille O’Neal
NBA 3194