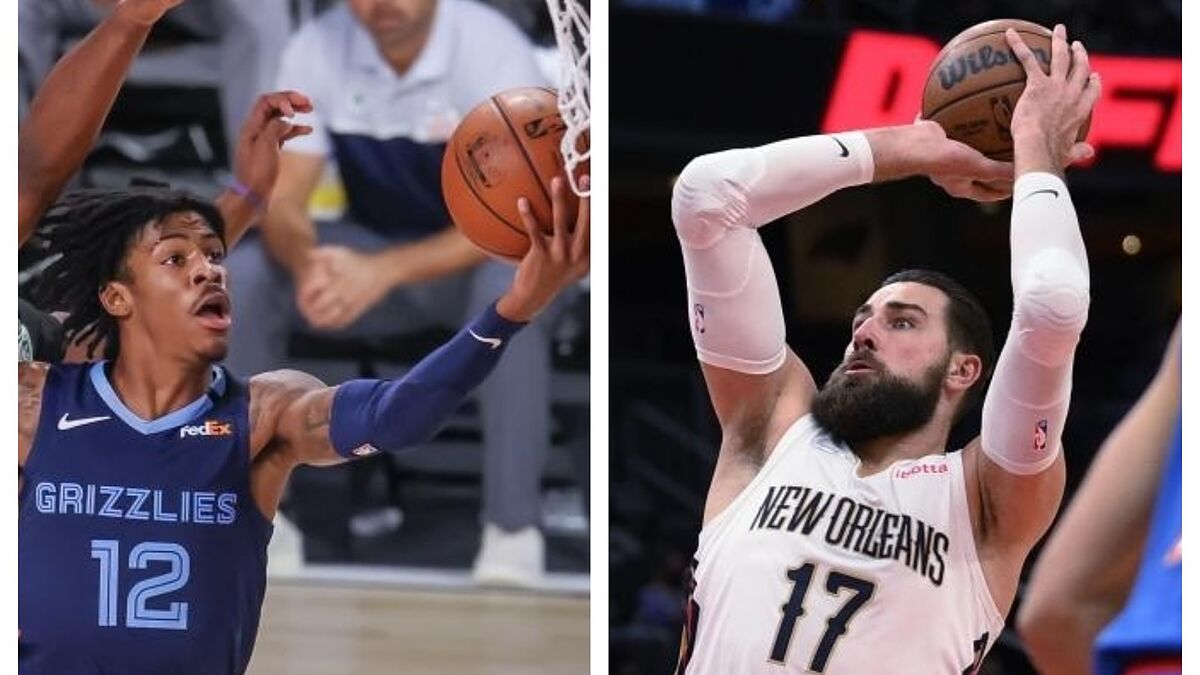 The best 3-point percentage this season in the NBA is possessed by a pvot of 2.11 meters and the best scorer in the paint is a point guard of 1.91 and 79 kilos. The world seems upside down, but it isn’t anymore. A few years ago, the figures for Jonas Valanciunas and of Ja morant they would have blown up a lot of heads, but it’s the evolution of basketball, in which positions matter less and less and versatility weighs more. In the age of the triple, the interiors have to be mobile to launch from outside and the exteriors, with exuberant physics, find holes to penetrate.

Valanciunas’ triplet ecstasy came in the victory of his Pelicans before the Clippers, in which he did 7/8. I ended up with 39 points, but 29 of them did before the break, including seven hits without failure from the arc. “The boys called him Dirk valanciunas“, joked his coach, Willie green, about the extraordinary toe exercise of his disciple, which also added 15 rebounds to the best statistic of his NBA career.

The Lithuanian pvot currently averages a 51.7% in triples, top of the League. Unthinkable when he came to the United States in 2012. In his first five seasons with the Raptors He threw four times from the rim and scored only once. That success came after 363 games in the NBA. This season takes 30/58. “I feel comfortable when I see them come in,” he says. A resource incorporated after many hours of training and that has not detracted from rebounding ability, one of its strengths. Average 19.3 points and 12.4 sacks.

A little better than the colossi

On the other side of the statistic appears Morant. The Grizzlies point guard, with his seemingly frail physique, outnumbers colossi like Joel Embiid and Giannis Antetokounmpo. Of the 24.1 points he is averaging, 14.4, 60.2% of the total, he scores at a distance of three meters from the rim or less. No point guard has ever led the NBA in points in the zone, something he’s doing now.

Trays, dunks or lifts are his specialties when he approaches the rival basket. So far this century only Shaquille O’Neal, the now injured Zion Williamson and Antetokounmpo outnumber him in paint production per game. They are three beasts that take off many kilos.

In his third season in the NBA, the base of the Grizzlies He is confirming that he is the best penetrating to the basket. He is one of the fastest players in the league, his vertical jump is in the top 10, his ability in the air is extraordinary and his first step leaves almost all defenders behind. That makes him a lethal player when he hits the basket or plays on the open court.

Comparison with Dwyane Wade or the Derrick Rose Before the injuries, she seems right when it comes to getting to the basket. That of Valanciunas and Nowitzki, not so much. Although the evolution of basketball proposes statistics unthinkable a while ago.

Tags: Memphis Grizzlies, basketball nba, New Orleans Pelicans
10% of NBA players have not yet been vaccinated against covid
NBA: Jayson Tatum goes from a blushing 1-for-22 3-point shooting to 51 points to match the legend of Larry Bird
NBA: Luka Doncic the court (and the bench) is too small: triplazo and technical talk without Chief Kidd
NBA 2550