NBA: The NBA of Portraits 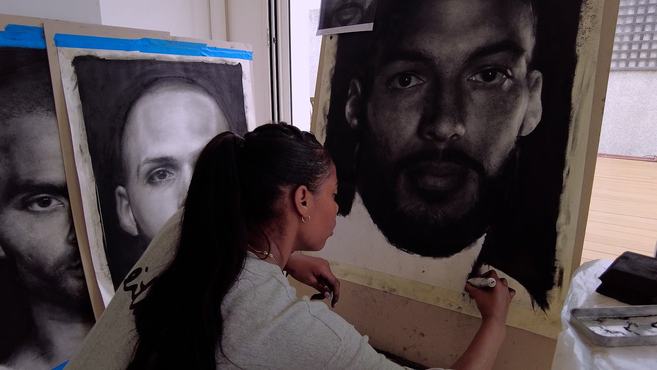 Lhe NBA makes the leap to portraits. In commemoration of the 75th anniversary of the best basketball league in the world, the NBA Creator Series i

Lhe NBA makes the leap to portraits. In commemoration of the 75th anniversary of the best basketball league in the world, the NBA Creator Series in Europe. It will have sections dedicated to France, Greece, Italy, Spain and Great Britain.

Following various styles and compositions, each piece of art is centered around the artists’ passion for the NBA, their favorite moments and connections. between Europe and the game of basketball. It starts with France, and portraits of Tony Parker, Rudy Gobert, Nico Batum and Evan Fournier.

In charge of Anaa Hoard, who was France’s representative in basketball at the European Under-16 that won the French team and silver in the Under-17 World Cup, combining her passion for basketball and her art studies in the U.S. Born in Evreux, she lives in Montpellier and her profile as an artist grew when she started sharing charcoal portraits of artists and athletes on her Instagram.

The realism of them was key, being, on many occasions, inspired by the things that matter to her or that she finds in her work. His NBA Creator Series can be viewed on all NBA Europe and NBA France networks.

Tags: basketball nba
NBA: The Suns crush the Nuggets with 48 points in the first quarter!
The 4 NBA records that it seems that no one will ever be able to beat
NBA: Six more months of pre-trial detention in Russia for Brittney Griner
NBA 3197

Loading...
Newer Post
Four teams from the Women’s First Division will play two pre-season games
Older Post
Austrian GP F1 2022: Czech Prez: “The car had a lot of damage and it was not possible to continue”