NBA: The video that has set off alarms about the physique of Zion Williamson: “He needs to lose weight” 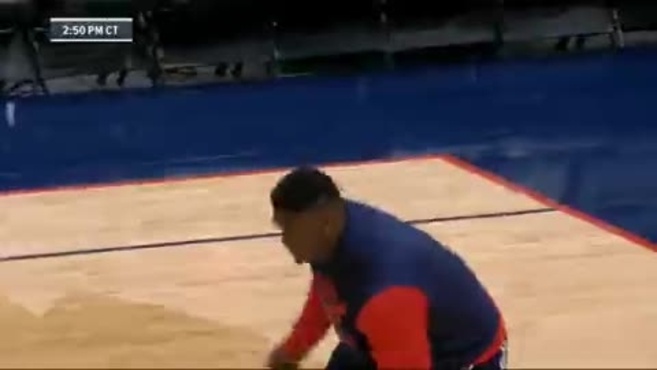 Updated 10/31/2021 - 11:38 Zion Williamson It is one of the great future projects in the NBA. However, injuries have prevented the full enjoymen

Zion Williamson It is one of the great future projects in the NBA. However, injuries have prevented the full enjoyment of a player who gives more than speak for his physical form and your overweight problems than for his game on the court.

Imparabale him when he is healthy, Zion has once again set off the alarms at this start of the season with a worrying image, endorsed minutes before the duel between the Pelicans and the Knicks when Carolina&#8217;s player jumped onto the court to warm up on his own.

Zion Williamson does warm-up drills on the Pelicans court

As Jake Fischer of the Bleacher Report has posted, Zion has reached almost 300 pounds (136 kilos) during the summer and has appeared in the Pelicans training camp weighing 11 kilos more than in his rookie season, reaching 129.

Legends such as Charles Barkley or Karl Malone have already warned of the dangers of being overweight for a player like Zion and now another NBA myth has been added as Walt frazier. &#8216;Clyde&#8217; took advantage of his position as an analyst of the Knicks games to send a message to the Zion environment: &#8220;You can see that she has put on a few extra pounds. She has to lose weight. She is only 21 years old and already has to work to lose weight.&#8221;

Tags: Zion Williamson, basketball nba, New Orleans Pelicans
NBA: Dominique Wilkins reveals Jordan’s cheek against the Hawks that he later had to eat
NBA: Gabriel Deck never intended to sign for Bara: “The rumors were not true, my plan was the NBA”
NBA: Aldridge makes history in a Nets that do not convince anyone
NBA 781