NBA: Trophies with the names of Magic and Bird for the MVP of the Conference Finals 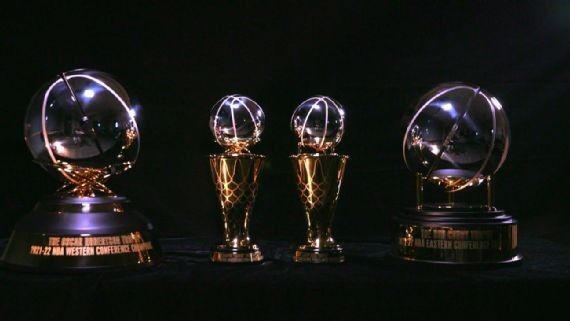 MMagic Johnson and Larry Bird will have trophies named after them. That has been announced by the NBA, which will honor two of the best players in

MMagic Johnson and Larry Bird will have trophies named after them. That has been announced by the NBA, which will honor two of the best players in history. The legendary point guard of the Lakers will baptize the MVP of the Western Conference finals, while the legendary forward of the Celtics will do so with the best player in the Eastern finals. The League will thus honor two Hall of Fame members whose rivalry put the NBA in another dimension.

In addition, the newly designed Eastern Conference champion trophy will be named after Bob Cousy, a point guard who won six NBA championships with the Celtics. The trophy for the best team in the West will be dedicated to Oscar Robertson, a point guard who won the NBA ring in 1971 with the Bucks and until a few seasons ago was the player with the most triple-doubles in history. He has been super Russel Westbrook for a while now.

The renamed trophies aren’t the only changes the NBA has made in these playoffs, as redesigns are being made to other trophies as well. The NBA champion, named after Larry O’Brien, which was introduced in 1977, is also being revamped. The updated version will feature a new circular base that will include the engraved names of all previous NBA champions, as well as changes to the appearance of the basketball on top of the trophy and on the trophy column, which features a golden basketball hoop

The Finals MVP trophy, named after Bill Russell, has received a similar update. While the silhouettes of the Conference Finals trophies won’t change too much, both will get a fresh look before the series kicks off this Sunday.

Tags: basketball nba
Grizzlies 103-129 Heat | NBA: Santi Aldama continues to add in the NBA against Jimmy Butler and some Heat who are beginning to scare their rivals
NBA Rumors: Toronto Raptors Go for Rudy Gobert
NBA: A huge Embiid does not prevent the hit of the Sixers in the capital
NBA 2828