NBA: Usman Garuba shows up with an immaculate statistic and makes the commentator explode: “Garuuuuba!” 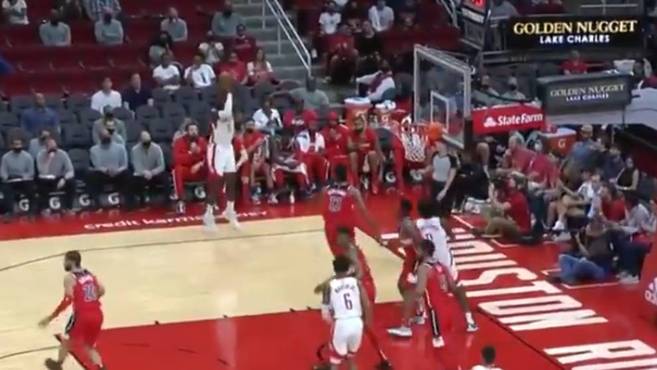 Lyou fans of Houston Rockets they discover, little by little, what they can expect from Usman Garuba. The former Real Madrid player will debut in

Lyou fans of Houston Rockets they discover, little by little, what they can expect from Usman Garuba. The former Real Madrid player will debut in the preseason with the Texas franchise in the victory over the Washington Wizards by 125-119.

The Spanish international spent six minutes on the floor and had time to make the commentator explode with a triple (“Garuuuuuuuuuba!”) on the only throw of three I tried. He also scored the only two-shot he threw to finish five points and 100% effectiveness. He also added a bounce to his stat sheet.

The Rockets were led by Kevin Porter Jr. who scored 25 points and it was the best of the meeting. The noob Jalen green has started illuminating his new hobby with 12 points, six rebounds and five assists, while Daniel Theis also finished with 12 points to his credit.

For their part, the Wizards had up to six players in double-digit scoring. Bradley Beal was the best scorer with 18 points, while Aaron Holiday did the same with 17 points and Spencer Dinwiddie and Kyle Kuzma, two of the signings of the season in the capital team, contributed 14 and 11 respectively.

Tags: basketball nba, Washington Wizards, Usman Garuba
NBA: Matteo Spagnolo graduates to Virtus: the Real Madrid youth squad “astonishes” in Italy and draws the attention of the NBA
NBA: Ricky Rubio, top scorer of the Games, out of NBA top 100 for being “offensively limited”
NBA: The bully that comes in basketball: the giant boy with NBA DNA that impresses the world
NBA 2525

Loading...
Newer Post
NBA: NBA bombshell! The Brooklyn Nets are tired of Kyrie Irving and could do without him this season
Older Post
NBA: A false fire alarm leaves Santi Aldama’s possible debut against the NBA champions on standby