NBA: Usman Garuba suffers his first ‘hazing’ in the NBA at the hands of a merciless Chris Paul 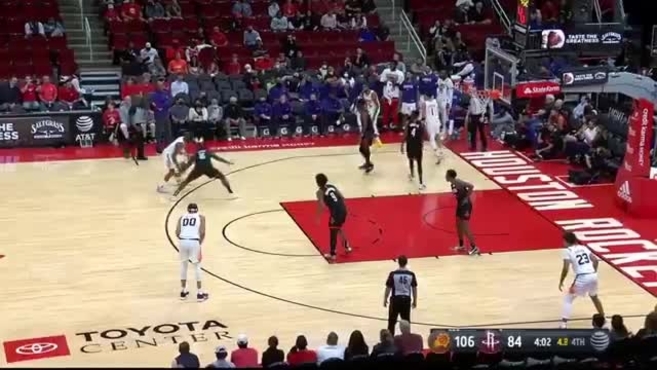 ANDl base Chris paul returned to the Toyota Center with the rival team of the Phoenix suns and the league runners-up were exhibited before the Houston Rockets those who defeated at home by beating 89-115.

Although Paul wasn’t the Suns leading scorer or rebounding leader, he did become The best man the Phoenix team ever had in defense by contributing 15 points, four assists, three rebounds and recovered seven balls, the best brand of the match.

If Paul made the difference in defense, the Hispanic shooting guard Devin Booker was in charge of leading the attack with 26 points, including three triples and 16 points in the first quarter, in addition to distributing six assists, capturing five rebounds and recovering two balls.

The pvot JaVale McGee contributed a double-double of 19 points and 14 reboundsHe made 9 of 12 shots from the field, and three blocks that put him at the forefront of the Suns’ inside game that featured seven players with two-digit numbers, including the five starters.

Houston, with the worst record in the NBA

While the Suns (9-3) achieved their eighth consecutive victory, the Rockets suffer eleventh loss in a row, the worst mark in the league.

The pvot Christian Wood had 17 points and eight rebounds as leader of the Rockets who now have a losing record of 1-12.

The rookie guard-forward Jalen Green, veteran Eric Gordon and forward Kevin Porter Jr. scored 12 points each, while the rookie pvot, the Turkish Alperen Sengun completed the game with a double-double of 10 points and 10 rebounds.

The Spanish international Usman Garuba he had minutes on the court again after several games of absence. The former Real Madrid player was left without scoring after failing all three shots to the basket he made, but captured two defensive rebounds in the five minutes he was on the court. Garuba, in addition, suffered in his flesh his first hazing in the NBA when Chris Paul signed one of the plays of the night by making a ‘cao’ and scoring a shot from medium distance.

Phoenix went into halftime with a 44-51 partial advantage and the third period began with a 20-6 leading streak that gave them the 50-71 partial and the game was ready for judgment.

Booker led the streak with 10 points and Paul reached six points. Houston had its closest approach on the scoreboard at 12 points the rest of the way and with no option to fight for the win.

Tags: Usman Garuba, basketball nba, Houston Rockets
NBA: Kyrie Irving messes it up again after supporting a film with anti-Semitic convictions
Garuba could go down to the G-League in his first NBA season
NBA: The return of a damn: Tyreke Evans can return after two years of sanction for drug use
NBA 4171