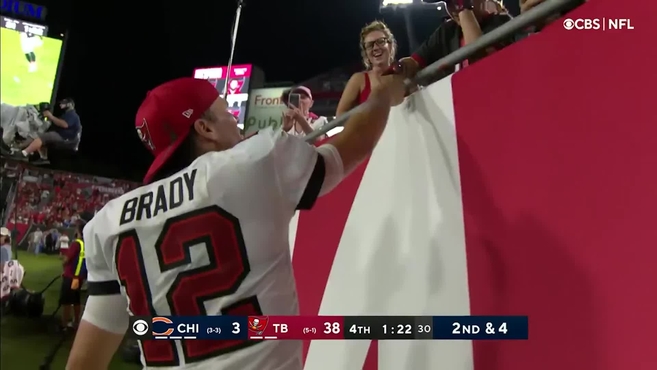 Tom brady it has no borders. The best player in the history of the NFL continues to add stories, both on and off the field, that puts his figure i

Tom brady it has no borders. The best player in the history of the NFL continues to add stories, both on and off the field, that puts his figure in a historic position in sports week after week of competition.

On the seventh date of the season, his Tampa Bay Buccaneers, reigning champions of the competition, swept away the weak Chicago Bears. However, his match on green takes a back seat after a wonderful gesture. Brady saw a boy in the stands holding a sign: “Tom Brady helped me beat a brain cancer.”

The boy was wearing the Brady with 12 on his back, and as soon as he saw him, the quarterback of the ‘Bucs‘he came over to say hello. Also, I gave him his cap. The boy burst into tears starring in an image that gives goose bumps. The best of all time showing his closeness, understanding and giving warmth to those who have suffered the worst. A gesture that does not understand colors.

On the green, the duel before the Bears proved, again, that Brady remains unbeatable. They defeated the set of ’38-3the city of the wind‘, evidencing the shortcomings of one of those who are running as heir to Brady, Justin Fields. The former field marshal of the Ohio State University signed zero touchdowns and was intercepted three times in addition to receiving two fumbles. He is 21 years younger than Brady.

At the match, Brady gave his touchdown number 600. It is the only one in history to achieve it and it is a brand to the total that several franchises add: Ravens, Panthers, Texans and Jaguars. On the collective level, Tampa bay still with just one loss. They are strong candidates to reissue the champion ring. And be so until Tom says …