NFL Picks: Josh Allen and the Bills will stop the surprising Dolphins 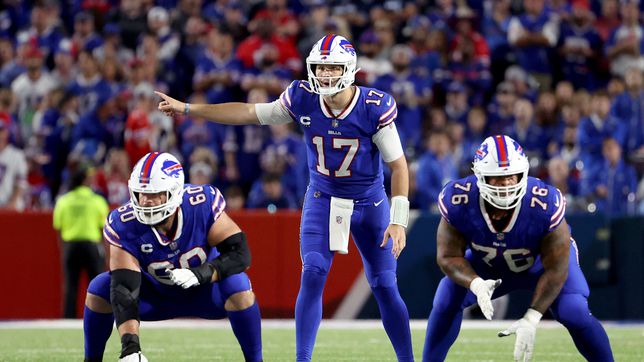 The best series and movies are those that tell us an interesting story, with a good dose of drama and a script that includes some unexpected, surpr

NFL Picks: Josh Allen and the Bills will stop the surprising Dolphins

The best series and movies are those that tell us an interesting story, with a good dose of drama and a script that includes some unexpected, surprising events, better known as “twists of the screw”.

If you love the NFL and still don’t know why, then you’re right. No problem.

Just look at what happened on Sunday, when three teams trailing by 13 or more points in the fourth quarter managed to win, something that hadn’t happened in a single weekend since 1992.

Do you want surprises? We have surprises. Week 2 featured five upsets, including wins by two of the league’s worst teams last year — the Jets and Jacksonville — on the road.

Drama? There have been 32 games played and 12 of them (37.5 percent) have been decided by three points or fewer, more than any other NFL season in its first two weeks.

Yes, this league offers us all that week by week and, by the way, we already have Week 3, so let’s go to the picks.

THE GAME OF THE WEEK

In Week 1 the Bills destroyed the NFL champion. Then they did the same thing with the team that finished with the best record in the AFC last season.

All of us who predicted that Buffalo would win the Super Bowl (and there were not a few of us), should feel comfortable with our pick.

The Miami Dolphins could ruin the moment.

To all of us Tua Tagovailoa critics (and there are more than a few of us), the young Dolphins quarterback shut us up with his impressive performance on Sunday in Baltimore.

Tua Tagovailoa set career highs for passing yards (469) and touchdown passes (six) and was the architect of Miami’s comeback, which trailed 35-14 late in the third quarter and won 42-38.

I think coach Mike McDaniel is not getting the credit he deserves, because two games were enough for him to show that the work culture in Miami has changed radically and that he is going to compete with the Bills for that divisional crown that the Dolphins have not won since 2008. .

Buffalo has won the last seven in this rivalry, including a humiliating 35-0 loss at Miami last season.

Led by Josh Allen, the Bills lead the NFL with 36 points per game and I don’t know if there is a defense in the league that can deal with this offense, but Tua and the Dolphins’ offense can probably respond to every Buffalo touchdown. .

Allen and Stefon Diggs are the No. 1 quarterback/wide receiver pairing in the league. Diggs leads the NFL with 4 touchdown receptions, second in catches (20) and second in yards (270).

Cornerback Xavien Howard and the rest of the Dolphins backcourt will have a tough day at the office.

So is Buffalo’s defense with Hill and Waddle in Miami’s surprising vertical attack.

The pick: Too much offensive power in this matchup, yes, but we can’t ignore the Bills’ defense, second in the league in allowing an average of 8.5 points per game. Tua will be under intense pressure all game and will eventually make a mistake or two that Allen will capitalize on to finish the job. Bills 31-21 Dolphins

If the Indianapolis defense didn’t have a good time with Trevor Lawrence, I don’t want to think what Patrick Mahomes will do to them. Pick: Chiefs 31-21 Colts

Denver has the best defense and the best quarterback. I think. Broncos 16-13 49ers

Baker Mayfield will now know that the NFC South is a tougher Division than it seems. Saints 24-14 Panthers

Very even teams in practically all statistics; slight advantage for Chicago to play at home. Bears 20-17 Texans

The Lions will make it interesting, but I don’t see a surprise in Minnesota. Vikings 31-21 Lions

John Harbaugh is 4-7 against Bill Bellichick and New England has won three of the last four against Baltimore. Patriots 23-20 Ravens

In just two games, Joe Burrow has been sacked 13 times and hit 20 times. The kid is very good, but if they don’t protect him, he won’t last long in the NFL. Jets 27-23 Bengals

One of these teams will wake up Monday with a record of 0-3 and will be a serious candidate for the disappointment of the year. Raiders 33-21 Titans

Carson Wentz against his former team, who with Jalen Hurts looks like a real contender in the NFC. Eagles 28-20 Commanders

Justin Herbert is not 100% and those Jaguars are no longer a joke. Chargers 24-20 Jaguars

Another Kyler Murray miracle? I don’t think so: Sean McVay is 10-1 against Arizona. Rams 30-26 Cardinals

YOU MAY BE INTERESTED: Police investigate alleged assault against Kyler Murray in Las Vegas

Aaron Rodgers vs. Tom Brady sounds great, but this game will be dominated by two of the best defenses in the NFL. Buccaneers 19-16 Packers

The MNF will be very entertaining thanks to two players: Micah Parsons (NFL leader with 4 sacks) and Saquon Barkley (leader with 236 rushing yards). Will Cooper Rush do enough not to lose this game? Giants 20-17 Cowboys

in the game line