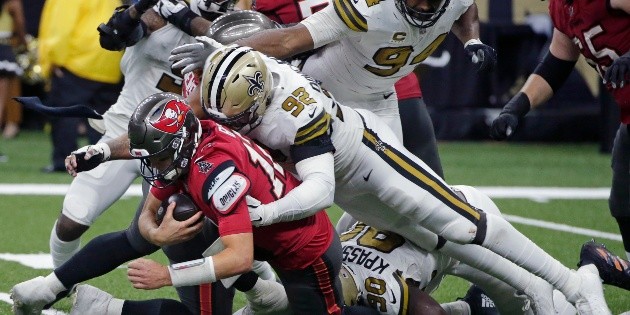 The New Orleans Saints beat the Tampa Bay Buccaneers 36-27 in a game that grew in excitement with one minute and 24 seconds left, w

The New Orleans Saints beat the Tampa Bay Buccaneers 36-27 in a game that grew in excitement with one minute and 24 seconds left, when defender PJ Williams intercepted quarterback Tom Brady and returned the ball 40 yards for a ‘touchdown’.

However, the victory proved costly for the Saints, who lost their quarterback to a left knee injury Jameis Winston after crashing through Devin White.

Backup Trevor Siemian replaced Winston and completed 16 of 29 throws for 159 yards and a touchdown, leading the Saints in five scoring units that produced two touchdowns and three field goals.

While for the Buccaneers (6-2), Brady threw four touchdowns, but also fumbled three times on a pair of interceptions and a fumble, which the Saints converted to 16 points.

Brady was also intercepted by CJ Gardner Johnson, who returned the ball 26 yards to the 35-yard line of Tampa Bay.

New Orleans turned that into a short pass from Siemian to fullback Alex Armah shortly before the end of the first half, giving the Saints a 16-7 lead after rookie kicker Brian Johnson missed the extra point.