NFL: The surreal Steelers – Bears: A referee hits a player and penalizes him! 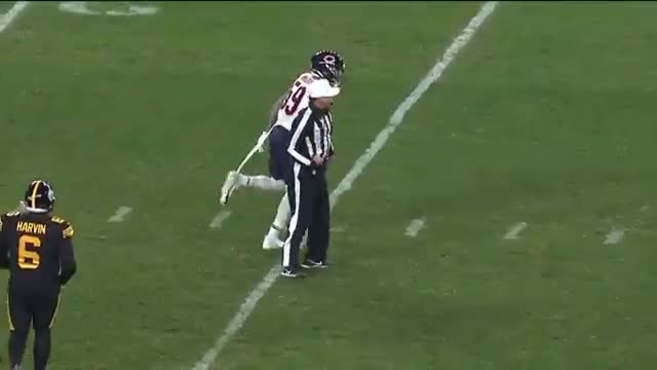 ANDl match between Pittsburgh Steelers and Chicago Bears from Monday Night Football of week 9 of the NFL it had a surreal ending. What seemed like

ANDl match between Pittsburgh Steelers and Chicago Bears from Monday Night Football of week 9 of the NFL it had a surreal ending. What seemed like an attempt for the &#8216;Windy City&#8217; franchise to add its fourth victory of the course ended up clouded by the attitude of a referee who emerged as the protagonist of the clash.

Chicago Bears they were coming back after a hesitant start. In front they had Ben Roethlisberger, rival quarterback, who solved his problems with mobility to get good passes and not be &#8216;hunted&#8217; by the rival defense. The Bears They started the comeback little by little until they managed to reach the last quarter with options.

In one of the decisive plays, Cassius Marsh, Bears defender, make a sack to &#8216;Big Ben&#8217;. I assumed that Steelers they lost all option to launch their attack and possession, with the option to come back, passed to their rival. Marsh stands up and celebrates the choice. He walks back and the referee Tony Corrente stars in a controversial gesture.

He sticks out his elbow and collides with Marsh. Then throw the handkerchief. It means that you have sanctioned the player. The motive is &#8216;taunting&#8216;and amounts to inconsideration. It may be due to the celebration of the action, but it would not be logical because it is not punishable enough nor does the referee see it face to face. Or he does it because of the shock, which the referee himself provokes.

Thus, the Bears they lose the attack. Go back to Pittsburgh that will have more attack time, deducting seconds and preventing the comeback of the Bears. A surreal and strange action that has not yet been explained.

Tags: sports Center, nfl
Who is the quarterback figure of the NFL
NFL: Bill Belichick reveals the player he admires the most … and it’s not Tom Brady
Aaron Rodgers revealed he used alternative covid-19 treatment instead of vaccine
NFL 91

Loading...
Newer Post
NBA 2021: Families enter the fight Jokic and Morris: threats in networks between Markieff and the Serbian’s brothers
Older Post
What’s next for the Mexican boxer after defeating Caleb Plant?