Nice and Marseille let out points in French football 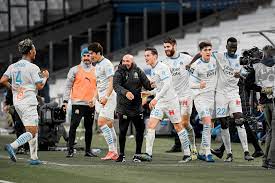 The Águilas del Nice dominated the match at the Allianz Riviera stadium, where they fired more than 20 times at the rival goal, but it wa

The Águilas del Nice dominated the match at the Allianz Riviera stadium, where they fired more than 20 times at the rival goal, but it was the visit that managed to score, thanks to Florent Mollet, just 10 minutes from the final whistle.

The defeated were left at 23 points and lost the opportunity to be sub-leaders in the tournament, only behind the favorite PSG, comfortable leader with 34 points, while Montpellier (19) climbed with his victory to the seventh seat in the season.

For its part, Marseille was unable to take advantage of the home at the Vélodrome and the advantage of a player, after the expulsion in the 56th of Brazilian Jemerson, defender of Metz, bottom team of Ligue1.

The Phocaeans added a point, and with 23 they maintained the fourth place, having a worse goal difference for and against than Nice.

In other Sunday matches on the 13th, Saint-Etienne left the basement of the campaign with its first victory, a 3-2 comeback against Clermont, and Stade Brestois beat Lorient 2-1.

The matches Nantes-Strasbourg (2-2) and Reims-Monaco (1-1) culminated in parity, while Rennes (19 points) and Olympique de Lyon (19) define tonight at the close of the day the club that will be located fifth in the table.

Loading...
Newer Post
Canelo was welcomed into the undisputed club by Josh Taylor, while Manny Pacquiao says boxing is in ‘good hands’, Lennox Lewis celebrates another impressive victory for the super middleweight king and Mike Tyson is already a huge fan.
Older Post
The brutal KO of a 160-pound MMA fighter in a slapping contest