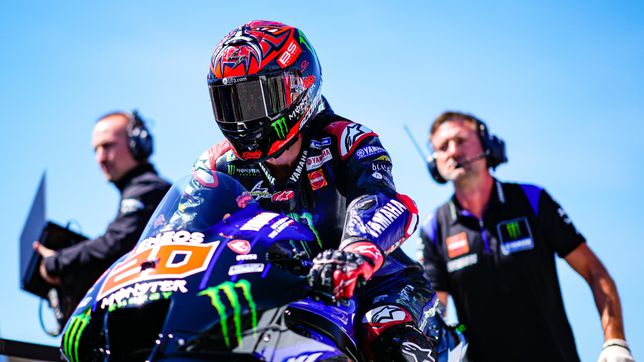 Everyone goes to war with their best weapons and in the case of the fight for the MotoGP World Championship, Yamaha has left behind several workhor

Everyone goes to war with their best weapons and in the case of the fight for the MotoGP World Championship, Yamaha has left behind several workhorses that could harm it at the end of the season. Faced with inferiority, the Japanese manufacturer has known how to defend itself, to the point of having established a considerable advantage over other rivals that becomes relative, taking into account what awaits the M1 from now on. Despite having found a perfect defense in Quartararo and cornering, the Frenchman is aware that “with more horses, he would have the best bike” but he has only been able to get used to a deficit that can take its toll on him more severely in the Red BullRing.

Yamaha faces the circuit that demands the most motor power in the entire World Championship. The Austrian track has always been hostile territory for an M1 equipped with 245 hp, compared to the more than 250 hp carried by the Ducati engine and the 260 hp of the Aprilia, its main rivals. Translated into performance, the Japanese motorcycle has a speed deficit of approximately 10 km/h, which on a track like Spielberg’s knows even more. And despite the maturity that Quartararo has acquired over time, dealing with the lack of confidence in the power of the bike, the poor results of the last rounds (he had a zero in Assen and was eighth in Silverstone), two demanding rivals like Aleix and Baganaia and a modified layout like the one in Austria, mean that supporting the whole set can be an arduous task.

The Red Bull Ring has a new image and what could be understood as an opportunity remains up in the air due to the other strong points of Aprilia and Ducati beyond their power. The safety gaps that the Austrian track presented were confirmed with the chilling accident of Zarco and Morbidelli in 2020, since their bikes were about to collide at high speed against Rossi and Maverick. Despite maintaining the usual route for another year, that moment was key for the MotoGP safety commission to call for a change in one of the few tracks designed by nature itself and the result, at least on paper, is a track slower in which the faster bikes give up their advantage on the second straight.

The new configuration of the Red Bull Ring introduces a chicane between turns 1 and 3 to reduce risks, eliminating what until now was known as turn 2. For a dissatisfied Quartararo, the layout “gives the feeling of being even more dangerous than before the modification”, despite the fact that the result is to reach what was the second braking point (fourth from now on) with a much lower speed and therefore, with less risk since in previous editions this point after facing a long uphill straight that left a compromised turn due to deceleration and the proximity of the wall.

But beyond his uncertainty about how and how safe the new track will be, Fabio has lost one of his strong points at Spielberg with this modification: “It won’t help me, because the third corner was a point where I could brake super late”. What does that mean? Despite the fact that no rider has yet been able to test the chicane, everything indicates that this point can enhance Aprilia’s superiority when it comes to attacking the curve or Ducati’s acceleration at the start. So the opportunity for Quartararo to minimize the damage per lap on a track, in which time will inevitably be left, would be annulled. And if he already feels close to his rivals in the fight for the title (Aleix is ​​22 points behind and Bagnaia 49), another important points cut could add more pressure to the leader and excitement to the championship. The fight is still going on.

“It’s shameful that Fabrizio says it’s Marc’s fault”
MotoGP | Rins: “I will try to learn from all the mistakes”
Bagnaia gets his fourth consecutive victory — Motorcycles — Autobild.es
MOTOGP 814

Loading...
Newer Post
Alan “Rey” David Picasso, hand in hand with SINDE, seeks to reach the next level
Older Post
Daddy Yankee in Chile 2022: what time does the pre-sale of tickets start and how to pay with a Tenpo card