Not one, but two aces up Bagnaia’s sleeve 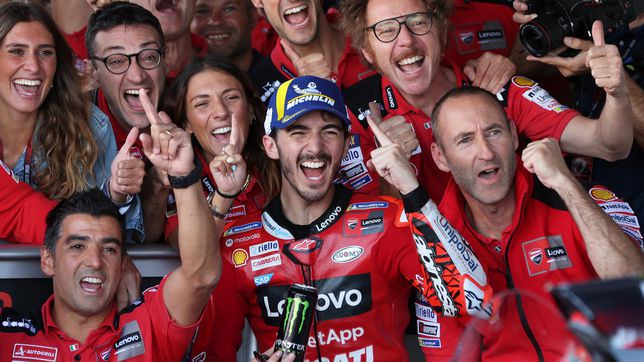 Not one, but two aces are what Francesco Bagnaia hides up his sleeve. He told it after his victory at Silverstone, the fourth of the course in Mot

Not one, but two aces are what Francesco Bagnaia hides up his sleeve. He told it after his victory at Silverstone, the fourth of the course in MotoGP and the second in a row. So anyone, of course, because it is neither more nor less than Valentino Rossi and Casey Stoner, who gave him valuable advice during the British GP.

“This weekend I have talked a lot with Valentino Rossi and he has helped me a lot to understand the situation, because I had many complications and he has helped me understand the tires and the temperature. And I asked Casey (Stoner) if he had done anything different in the past that had helped him be more competitive on this track and this morning he texted me. And today I tried to emulate part of what he told me in the race, although the tires were different. In any case, I am fortunate to have Rossi and Stoner around me, who help me a lot”, almost nothing to the device according to Pecco.

On the look he emulated from the two-time Australian champion, he said: “He was very good at finding traction out of corners and that was his advice. Trying to wait to open the gas, but the problem is that with five laps to go I ran out of rear grip. And there I had to apply my riding style, using the front end and my braking”.

Regarding his victory, the Ducati rider assured that he was “very happy with this race. It was one of the best, because I had problems all weekend. Yesterday I was satisfied with a top four, but this morning I was able to find something else with the medium tyre. I knew it was going to be difficult in the final part of the race, the only thing I could do was protect myself with the front tyre.

With his victory and the puncture of Quartararo, who was only eighth, he is 49 points behind the leader with 200 points still to be shared, but he is not obsessed: “I have recovered many points in recent races, but I do not want to think about the championship . The next race is Austria and I will try to think only of that race. Today the key was the opportunity that Fabio’s (Quartararo) Long Lap gave us, because if he had been in front of him he would have escaped, but Zarco closed all the gaps. Also, Aleix (Espargaró) was going to suffer with yesterday’s crash and I took advantage of the opportunity. My goal is to be competitive and win races. I was lucky that in Assen, Fabio made a mistake and in this circuit he has had to serve a penalty. I know that in normal conditions Fabio is always there to compete against me, and on this circuit he was faster, but with that penalty I think he has hurt him. And we have done a good job because we have taken advantage of that situation”.

And as for his first battle with Maverick, he summed it up like this: “It was the first melee with Maverick. He was more competitive than me, but he had a bad start and there he lost time. At the end of the race, I was using the front end a lot and when he passed me, I immediately overtook him, because I knew that he was stronger under braking and he was already very tight on tyres”.

Loading...
Newer Post
Who are the F1 drivers? Colton Herta’s B-side: the musician who sounds in the highest category and could surpass his father
Older Post
With which drivers do you get along best on the Formula 1 grid?