Olympia scandal in Suriname, elimination of Qatar and failure of Motagua in Concacaf 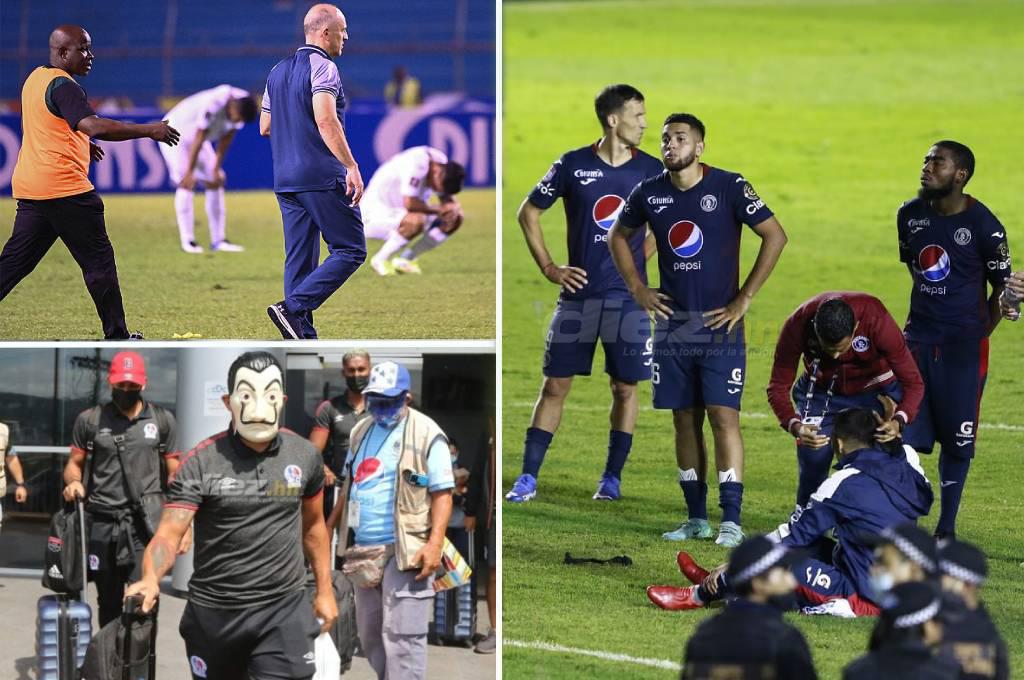 2021-12-15 It will be difficult for the Honduran fan to remember the year 2021, a time when Catracho football lives one of its gr

It will be difficult for the Honduran fan to remember the year 2021, a time when Catracho football lives one of its grayest stages in its history.

National football lost credibility on the field and even morally in a period of three months where the clubs of the League and the Catracha National Team were left in debt.

There were three events that marked the year, starting with a global scandal that stained the image of a club that experienced one of the biggest embarrassments in its golden history.

– On Tuesday, September 21, the tragedy began –

Olimpia traveled two days earlier to the stormy lands of Suriname, where she arrived up to 25 hours after setting sail from the capital, including a delay on the overland road when she punctured the bus and was stranded in the middle of nowhere.

It was at the Flora stadium with a capacity of 3,500 spectators where the three-time champion was beaten, although not on the field, as there they beat Inter MT 0-6 for the first leg for the round of 16 of the Concacaf League.

It should be noted that the match was striking since before it began due to the presence of the country&#8217;s vice president and club owner Ronnie Brunswijk, a 60-year-old ex-guerrilla and wanted by Interpool in European countries for numerous crimes.

It was after the meeting that it happened. The character interrupted the dressing room of Olimpia and decided to give away money, as he said, it was his way of thanking the Honduran club for visiting his country; he confessed that he gave at least 100 US dollars to each player.

The event was a worldwide scandal and everything culminated in the elimination of both teams from the competition. Hard blow for León, hard blow for Honduras.

Prior to the meringues scandal, the National Team had played the first three qualifying games on September 2, 5 and 8 for the Qatar 2022 World Cup.

The sensations were not entirely good, because after the two starting games, the H drew two draws, one in Canada, which was positive, and one in El Salvador, which was negative, so those led by Fabián Coito They had to beat the United States in the Olympic stadium to keep their heads high on the octagonal, being there where the tragedy occurred.

Honduras left winning and playing well at halftime (1-0), but at the start of the complement the tie was granted, the team fell morally, ended up being humiliated 1-4 and was never the same again.

In the following October window, the Bicolor started playing at home against Costa Rica, against whom they equalized without goals and put them on the ropes. After another win in Mexico (3-0), the national team had to beat Jamaica at home to continue with World Cup aspirations, but the unexpected happened: we lost 0-2 and were virtually out. Fabián Coito was sacked at the end of the game on the 13th.

In his place, Colombian Hernán &#8216;Bolillo&#8217; Gómez came to the technical direction. Honduras played its last card in November on November 12 against Panama, a victory kept them alive, and everything was going perfect, the Bicolor won 2-0 and was still hopeful, but in the final stretch, the canaleros discounted and in nine minutes went to 2-3 definitive. In Costa Rica it was the grave: defeat 2-1 with a goal in discount and to think about the 2026 World Cup.

Motagua had in his hands the possibility of clearing the name of Honduran soccer that had lost credibility in the eyes of the world.

The Cyclone qualified for a new Concacaf League final, its third in the last four years, so it was also its opportunity to redeem itself on the international level since it had been runner-up in previous editions bringing in 2018 and 2019 against the ticos Herediano and Saprissa at home.

The appointment was before Comunicaciones de Guatemala, which historically has been inferior to Honduras in football, so the outlook seemed favorable, but things for the five-star country continued to go wrong, or rather disastrous.

A 1-2 defeat at the National Stadium in Tegucigalpa had left Diego Vázquez&#8217;s team very badly off, as they were forced to win at the Doroteo Guamuch stadium by at least one goal to go into overtime or two to seal their championship.

In the second game, Motagua took the quick lead at 4 &#8216;minutes and before half an hour had hit again, a result that gave them the championship, but another Honduran passed: in the last five minutes of the first half they allowed themselves to be tied with goals from set pieces.

The blue team fell mentally and soccer and the only complement was the burial for our sport that we love so much &#8230; 4-2 for Cremas, 6-3 global and another ridiculous international for Honduras.

Tags: inter mt
It’s hard to go back to football – Sport-Journal
6 pairs of Mexican siblings that matched in the same team
The TSJPV ignores LaLiga and maintains the football capacity in Euskadi at 60% | sports
FOOTBALL 1124

Loading...
Newer Post
Do you want the car of the F1 champion? Verstappen puts its Honda Civic Type R up for sale
Older Post
MMA | Global Combat | Cristian Scorpio Barraza will compete in the MMA Combat Cup in the United States