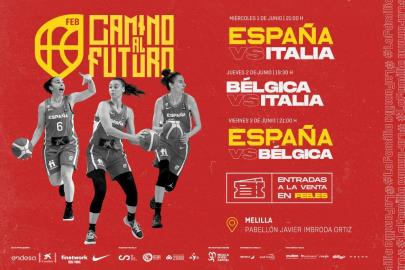 Tickets are now available for the tournament that the Women’s National Team will play in Melilla at the beginning of June as part of the Road to the Future Tour. Spain will face Italy (June 1) and Belgium (June 3) in two friendly matches to be held at the Javier Imbroda Pavilion. Both games will be played at 9:00 p.m. and can also be followed by Teledeporte.

The match between the two visiting teams will take place on Thursday, June 2 at 7:30 p.m. This Thursday the tickets for the three matches and the subscription for the Tournament have been put on sale.

These matches are the first part of a concentration that will culminate with a visit to Guadalajara and Italy and that aims to prepare the team led by Miguel Méndez for the next international events.

The last time that the Women’s National Team was in Melilla was in the window of November 2018 in which the team played the qualification for the 2019 Eurobasket against Ukraine, a championship of which they would be proclaimed champion.