After several weeks of legal disputes and uncertainty about Álex Palou's future, the Spanish IndyCar driver finally got into a McLaren Formula 1 te

After several weeks of legal disputes and uncertainty about Álex Palou’s future, the Spanish IndyCar driver finally got into a McLaren Formula 1 team. It was at the Circuit de Barcelona, ​​in some private tests that the Woking team prepared between September 14 and 16 for the Catalan and Pato O’Ward, driver of the papaya brand in IndyCar.

Palou, in a publication on his social networks, was excited to be able to get into the McLaren car from last season: “What an incredible experience! These three days driving the MCL35M in Barcelona have been an absolute dream. Thank you very much McLaren.” Álex Palou with the MCL35M at the Circuit de Barcelona.McLaren

The Spaniard also wanted to thank his IndyCar team, Chip Ganassi, with whom he was proclaimed in 2021 and with whom he had a legal battle regarding his seat in 2023. Finally, Palou will remain in the Indianapolis structure next Season: “Thanks to Chip Ganassi for making this possible, I can’t wait to get back to work.”

In addition to allowing him to test with McLaren, Chip Ganassi has also authorized Palou to be a reserve driver for the Woking team, so in the end the Catalan has been able to fulfill his dream. “What a day to be alive!”, the pilot replied to a publication of the British team. 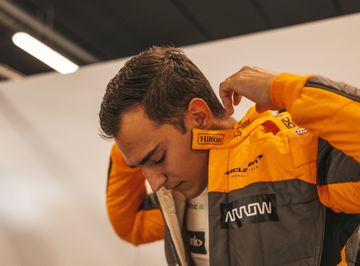 Álex Palou preparing to climb the MCL35M in Barcelona.McLaren

What will happen at the Australian GP?
Drive to Survive is greenlit for two more seasons on Netflix
F1 | Carlos Sainz and the new Ferrari engine: “The sooner the better”
FORMULA 1 2427

Loading...
Newer Post
“It will mark the history of Marseille, I did not expect it to be at this level”
Older Post
The difference of 5 thousand dollars between two of the most exclusive cars of Andy Ruiz Jr.