Panic breaks out in Davis-Romero fight over false shooting alarm 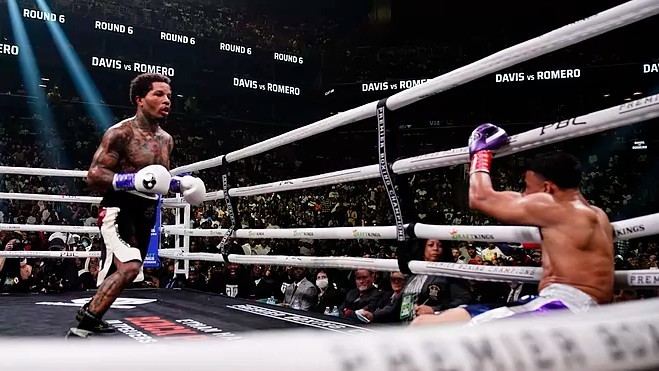 Gervonta Davis knocked out Rolando Romero in the sixth. APvSeveral people were injured when the crowd in the Brooklyn's Barclays Centerhurried back

Gervonta Davis knocked out Rolando Romero in the sixth.
AP

vSeveral people were injured when the crowd in the Brooklyn’s Barclays Centerhurried back to the arena after the fight between Gervonta Davis and Rolando Romero Saturday night.

The incident occurred because some people they thought there was an active shooter on the scene, however, the new york police denied shots have been fired.

GOODNIGHT BROOKLYN @Gervontaa KOs Romero in round 6 with a POWER left hand #DavisRomeropic.twitter.com/O9KPaxRvHi

the boxing reporter Ryan SongaliaHe told the new york post a fight broke out and some people they mistook for a shooterprompting dozens of people to return to the arena.

“We are accustomed to fights at boxing eventsbut recent headlines and crowd panic had many of us worried that our worst fears come trueSongalia said.

Fortunately we were able to return to our seats to file our stories and exit safely. People were scared, it wasn’t like they were going back inside to get away from some people throwing punches. It was like they were running for their lives.”

Japanese tennis player US Open champion Naomi Osakawas present at the fight and left his opinion on social networks about his reaction to the panic that occurred in the Barclay’s Center.

“I was right in the middle of Barclays and all of a sudden I heard screams and saw people runningthen they yelled at us that there was an active shooter and we had to take cover in a room and close the doors, he was fucking petrifiedOsaka tweeted.

I was just in the Barclays center and suddenly I heard shouting and saw people running, then we were being yelled at that there was an active shooter and we had to huddle in a room and close the doors, I was so fucking petrified man.

The fight ended with a blunt Davis’ knockout of Romero in the sixth roundin order to defend the title of the light weights of the World Boxing Association (WBA).

A left blow ended Romero after a fight that until then was even.