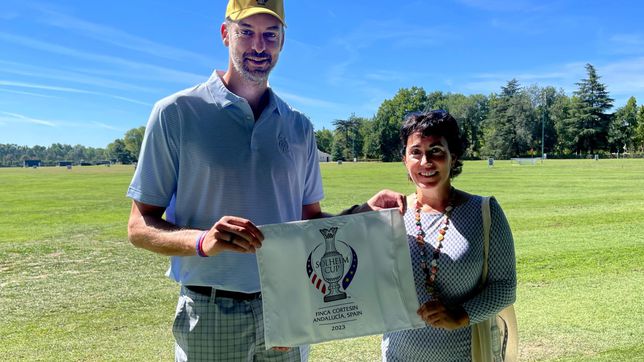 Pau Gasol, the best basketball player our country has produced, is the new ambassador for the Solheim Cup 2023, an event that will take place in Se

Pau Gasol, the best basketball player our country has produced, is the new ambassador for the Solheim Cup 2023, an event that will take place in September next year at Finca Cortesín, Málaga. He thus joins a select list that includes other Spanish sports figures such as Rafael Nadal and José María Olazábal.

The winner of two NBA rings with the Los Angeles Lakers is a great golf fan, a passion he shares with his great friend, Rafa Nadal, and since the pandemic and his subsequent withdrawal from professional basketball he has intensified his practice, both receiving classes and participating in charity tournaments.

”The definitive push that made me start playing golf came from the confluence of three factors: during confinement it was one of the few sports that could be practiced, it coincided with my recovery from a foot injury and my wife’s family He has always played golf, so I was encouraged, “explained Gasol.

”At first I was pretty bad at it, it was a bit frustrating, but I didn’t give up. I started giving classes, I saw the first progress… and now, whenever I can, I try to play wherever I go”, she acknowledged. Pau Gasol has always been involved in numerous solidarity projects. In 2013, he created the Gasol Foundation together with his brother Marc to reduce childhood obesity figures and promote healthy habits. In addition, Pau is a strong advocate of gender equality in all areas, but above all in sports.

For all these reasons, the former basketball player has joined the work of promoting the Solheim Cup 2023, after learning the details of the project from Alicia Garrido, executive director of Sport & Business, the company that organizes the most important women’s golf tournament. ”The celebration of the Solheim Cup for the first time in Spain is a source of pride and it is an event that we have to enjoy, but, above all, support, because I am sure that it will mean a before and after for Spanish golf in general and for Spanish women’s golf in particular. I have no doubt that this tournament will encourage excellent players to continue coming out,” he concluded.

The Solheim Cup 2023, an event of exceptional public interest whose official venue is Finca Cortesín, is sponsored by PING, Costa del Sol and Rolex as global partners; and by the ‘Department of Tourism, Culture and Sports of the Junta de Andalucía, with the co-financing of the European Union, Acosol, the Marbella City Council and the Benahavís City Council as official partners, and Reale Seguros as official sponsor. Solán de Cabras, Eversheds Sutherland, the Ayuntamiento de Casares, Toro, Vithas, EZ-GO and Jet Set Sports are official providers. Promotes and organizes Sport & Business. They collaborate in their organization LET, LPGA, RFEG, CSD and RFGA.