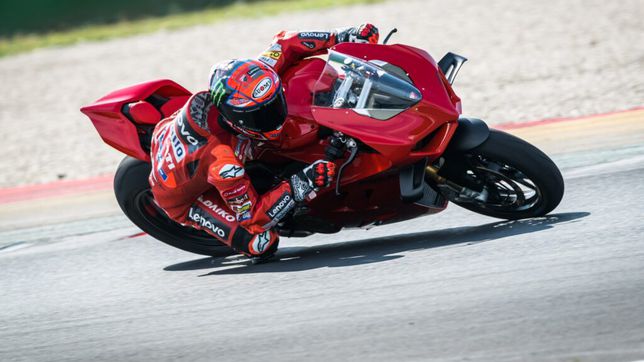 The Ducati team took the opportunity to celebrate its special week with its fans at the Misano Marco Simoncelli Circuit. The Race of Champions is

The Ducati team took the opportunity to celebrate its special week with its fans at the Misano Marco Simoncelli Circuit. The Race of Champions is the main stage of ‘Ducati Week’ where MotoGP and Superbike riders compete on the track, taking advantage of the fact that both competitions are in their summer break. Most of the bikes competed with a Ducati V4 engine.

Ducati MotoGP rider Pecco Bagnaia was the winner of the ‘Race of Champions’. Bagnaia had a good level despite the summer break in motorcycling, but he dominated the entire test at the Missano circuit in a race that lasted only 12 laps. From the ‘pole’ to the highest place on the podium.

Pecco Bagnaia had all eyes focused on him, since at the beginning of July when his accident in Ibiza was known, exceeding the maximum alcohol level allowed. However, this weekend has confirmed that the Italian is fully involved in the competition. Luca Marini finished second, six tenths behind ‘Pecco’ and Marco Bezzechi finished third, both driving for the team.

Missano’s test also had a little Spanish accent. Jorge Martín drove with his Prima Pramac team finishing in sixth position and moving up two places from the start. The current leader of the Superbike World Championship Álvaro Bautista also participated in the test. In qualifying before the race he finished in 14th position and later in the race he finished 18th. Other well-known MotoGP names also participated such as Jack Miller (4th), Enea Bastianini (5th ahead of Martín) or Johan Zarco who finished eighth.

Classification of the Race of Champions.@Dazn

GP Emilia Romagna MotoGP 2021: Darryn Binder climbs and this is the MotoGP grid for 2022
MotoGP extends its calendar for 2022 to 21 Grands Prix, two more than in 2021
Nine pilots in a scarf and in search of a solid leader | sports
MOTOGP 703

Loading...
Newer Post
A fire causes damage to the Berciano golf course
Older Post
Demi Lovato in Chile: when is the concert, prices and how to buy tickets