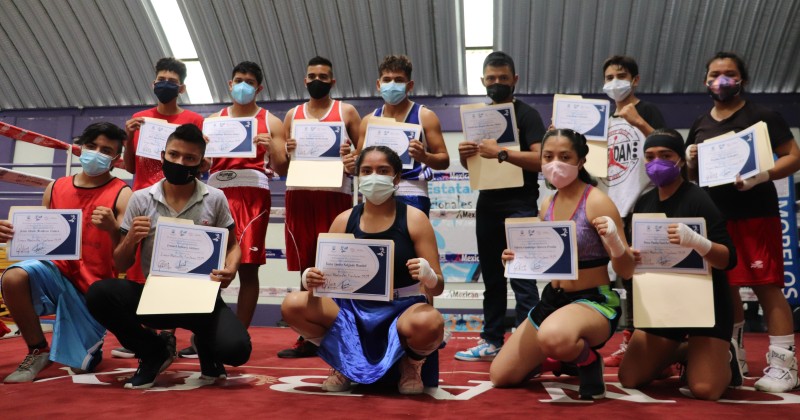 With the participation of boxing players from municipalities such as Axochiapan, Cuernavaca, Cuautla, Jiutepec, Temixco, Puente de Ixtla and Zacate

With the participation of boxing players from municipalities such as Axochiapan, Cuernavaca, Cuautla, Jiutepec, Temixco, Puente de Ixtla and Zacatepec, the state boxing qualifying round was held that provided tickets to the 2021 Popular National Games, which will be held in the port of Acapulco, Guerrero, from October 17 to 23.

This was reported by the director of Sports Development of the Institute of Sports and Physical Culture of the State of Morelos (Indem), Isaac Terrazas García, who witnessed the six eliminatory matches in the combat gym of the Centennial Sports Unit, and pointed out that the and The winners are already guaranteed their uniforms, round trip, lodging and food in said national fair.

In addition to the female sector with Valeria Guadalupe Cabrera Peralta, 54 kg .; and Tiara Anette Salgado Montiel, in the 60 kg.

It should be noted that all participants were given an acknowledgment signed by Isaac Terrazas and Germán Villa Castañeda, general director of Indem, in addition, some elements that stumbled in their respective battles, will be evaluated and possibly considered to participate in other divisions.

Finally, the Director of Sports Development commented that for this coming Saturday, September 18, the state martial arts championship will be held with a view to participating in the Popular Nationals, by the delegate on duty Armando Mercado Hernández, emphasizing that the event It will be behind closed doors, since the participation of more than 150 fighters is expected.

Colombian boxer fights in Tokyo with someone else’s shirt and the most embarrassing thing is why
Boxing: Yordenis Ugs: “Pacquiao’s is the most important fight of my life”
Boxing: Sergio Garca awaits the date of his world elimination
BOXING 418