Pink Floyd and his love of football 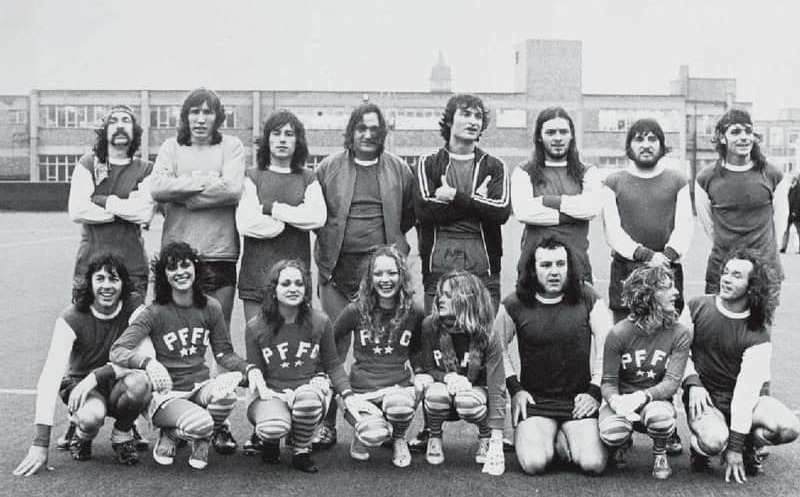 "Hey! Teacher! Leave them kids alone!" Is the chorus of the mythical song 'Another Brick in the Wall', by Pink Floyd, in which before the

“Hey! Teacher! Leave them kids alone!” Is the chorus of the mythical song ‘Another Brick in the Wall’, by Pink Floyd, in which before the start of the verses we can hear that one of the teachers he mocks the poem written by the boy protagonist in which he expresses his desire to have his own soccer team: “The money comes back, I’m fine Jack. Get your hands off my pile. New car, caviar, four star dream. I think I’ll buy a football team ”, as well as in this prelude, the British band made in several of their songs a reference to football, a favorite sport of Roger Waters, David Gilmore, Nick Mason and Richard Wright, who decided to go beyond Support a Premier League team and form your own club.

In 1970, after having conquered hundreds of stages, Pink Floyd put aside ‘sex, drugs and rock’ n ‘roll’ and decided to capture their love for the ball inside the rectangle and show us their great skills with the ball, which they served to vent a bit from the music scene.

The team that they formed was called ‘PF FC’, which meant Pink Floyd Football Club Team, unfortunately they could not enter the professional field in any of the thousands of leagues that exist in the United Kingdom, so they only played in a amateur, and they were measured against other musical bands that made up their teams (this practice was common in those times, Iron Maden also had their teams), journalists, and even played before the staff of the Marseille Ballet.

Within the team, the only player whose position was defined was Roger Waters, as his hands were not only good at writing songs and playing bass, but also at stopping the ball, which is why he was the goalkeeper.

For their part, Nick Mason and Richard Wright (vocalist and keyboardist) were field players, it is unknown what position they played in the matches they played.

The love for football was born because Waters and David Gilmore (guitarist, vocalist and songwriter) were fans of Arsenal, even both regularly attending Highbury to watch the Gunners games, interrupting on several occasions the recording of their album ‘Dark Side Of The Moon ‘.

One of the ways to make a connection between their two passions (music and football) was in the song ‘Fearless’ from the Meddle album, in which they paid a tribute to Liverpool, as they added the sound’ The Kop ‘in Anfield singing’ You’ll Never Walk Alone ‘.

Although the song ‘The Gunner’s Dream from The Final Cut album has no connection to football, it is said to have been created by Roger Wates while thinking about his favorite team.

Tags: Pink floyd, Soccer, Pink floyd football club
Documentary by Laura Serrano presented
Boxing changes more than one facet in your life
Canelo demanded that reggaeton be removed prior to his fight against Plant
FOOTBALL 2313

Loading...
Newer Post
THAT’S WHY I WAS NOT BEFORE THE HEADLINE BSC: Dorregaray would go to Arab football
Older Post
NBA rumors: Golden State Warriors and one last desperate offense by Marc Gasol